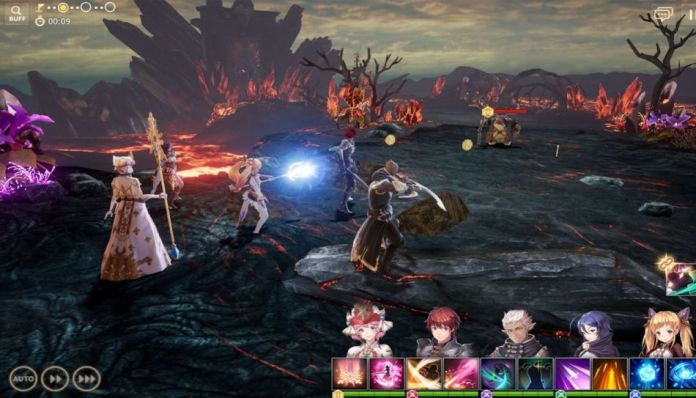 Angelo (Tier S) – Form a team of Dark units and he will boost their damage quite a lot – he has good damage too.

Ash (Tier S) – One of the best early game characters, but will do well late game as well – has good damage.

Jasper (Tier A+) – Silences the enemy and deals damage.

Sophia (Tier A+) – Heals and resurrects.

Blossom (Tier A) – She increases the damage of Fire allies, so if you have a dedicated Fire team she could be good.

Esta (Tier A) – Boosts the damage of Physical type heroes, so if you form a team around her, she could be pretty decent.

Helena (Tier A) – Heals and resurrects.

Ludmila (Tier A) – Fire type hero which can be pretty good because she boosts fire heroes’ HP and damage.

Ophelia (Tier B) – She is decent – boosts team mates’ Block rate and can add buffs or debuffs.

Yggdrasil (Tier B* or A* – depends on the team) – He is a good support, has buffs and heals.

Teze (Tier B) – Deals a ton of single target damage.

Colette (Tier C) – Deals damage and reduces the status effect resist rate of the enemies – also has a chance to inflict chill.

Hien (Tier C) – Works well with a Fire team because of the Leader Skill (increases ATK by 35% and Crit Rate if there are 3+ Fire heroes on the team) – inflicts burn, decreases enemy damage.

Leika (Tier C) – Decreases Crit Rate of the enemies and does damage.

Ren (Tier C) – Inflicts Poison and can inflict Bleed too.

Alex (Tier D) – Has a buff and a self shield barrier.

Celesta (Tier D) – Has debuffs and can inflict Bleed.

Elphie (Tier D) – Increases the ATK of an ally and can remove 1 debuff from allies.

For the Arena your characters will focus more on sustain, single target burst damage, as well as debuffs and other annoying things like that because here you will fight other players basically – so you want super strong units, no matter if they are AoE or not.

I am only going to mention a few of the best SR characters which you should get, because I don’t think it’s worth going through all of them. You might only have to use 1-2 of them anyway on your teams (and maybe 1-2 more on the PvP team) so here they are:

The Best SR Heroes worth getting for Arena: Cicero, Proxy, Darkhell and maybe Nekoroid.

This would be it for our Overhit tier list of all the best characters in game! Who have you added to your teams? Let us know down in the comments section below and don’t forget to take a look at our Overhit game guide to learn more about how you can improve the heroes once you acquired them!