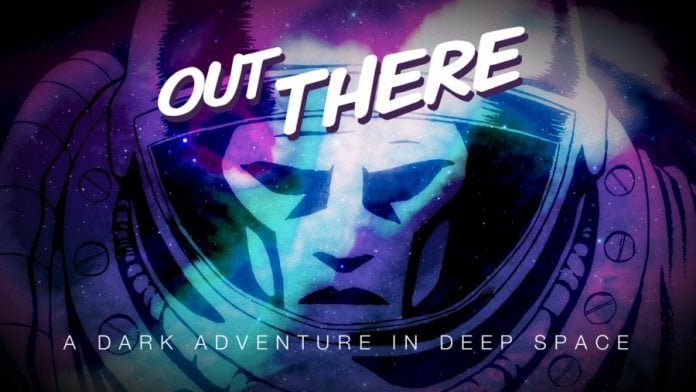 I’ll be honest, when I saw the first details about Out There, I was dumb enough to say “OK, just another FTL clone.” And then I had the chance to play this iOS title and now I’m glad I did: it’s much better than FTL, with a ton of extra things to do, options and ideas.

Out There puts you in the frozen shoes of a frozen guy sent off in space to explore the universe and find new planets for our fellow humans to explore. But something goes wrong (or terribly right) and he wakes up galaxies away, Out There in space. And since he was probably happily married with 4 Megan Fox lookalikes, he wants to go home. You’ll help him achieve this goal, explore some unknown galaxies in the meantime, check out some black holes, meet some alien dudes and randomly lose fingers during ship repairs. And fail miserably most of the times.

Because, yes, Out There is that type of a game: brilliantly difficult, with a permadeath that almost makes you cry, but also makes you hit the restart button immediately. My first couple of tries were dreadful. Until you get the hang of what’s important and what’s not, you will fail worse than you do playing Flappy Bird. But then, when you have some knowledge, you’ll start to do a lot better. 24,000 points better in my case, and I’m sure I still haven’t reached half the distance to my home planet. 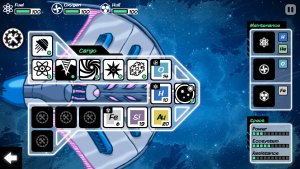 The gameplay is simple in theory but extremely difficult to master. Especially since everything is randomized whenever you start a new game, so you can’t follow the same path. You have a ship with limited rooms that can be used either to carry cargo or pieces of equipment that you have to build. Using that cargo you will never have enough room for. To make things even more difficult, there are four types of resources that can be considered consumables: Oxygen is required for your ship’s supply of oxygen, Fe (Iron) to repair your ship and He or H for fuel. You don’t have to be a chemistry freak to know all that, it’s easily explained by the game’s interface.

And if that’s not enough, you don’t know all those great technologies that improve your ship. You will learn them in a random order during your trips or alien encounters. You will have to choose which new tech stuff to build, which to ignore and you’ll always find yourself in a race to get more resources from the planets you find on your way and meet the alien dudes to learn their language and find out who the architects are and what do they want from you.

This entire randomness and the fact that there are so many things that can happen in the game (including boarding new ships, terraforming planets and destroying entire galaxies) make the game so insanely pleasure-spot-tickling. You never know what to expect and you bite your teeth every time you reach a new galaxy and find out that you can’t harvest any fuel. And then you die. It’s intense, it’s captivating and it’s just like a drug: you always want more, you’re always curious to find out more and every time you get a different experience. I don’t think that many games can offer this! 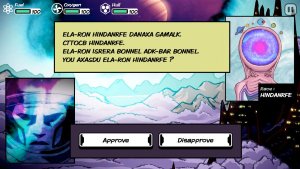 Out There also looks good. It’s not a graphics-heavy iOS game and won’t blow you away with tons of animations and stuff, but the cartoonish style works great with the entire story and you will have no reasons to complain. Mostly because you will be completely sucked into the adventure itself, not caring nor noticing anything else.

In conclusion, Out There is one of the best games I have played in recent times and probably the best iOS title released so far in 2014. Certainly a candidate for the game of the year awards and one that you will play for hours and hours. A must play!

iTunes link: Out There

Out There Review (iPhone, iPad)