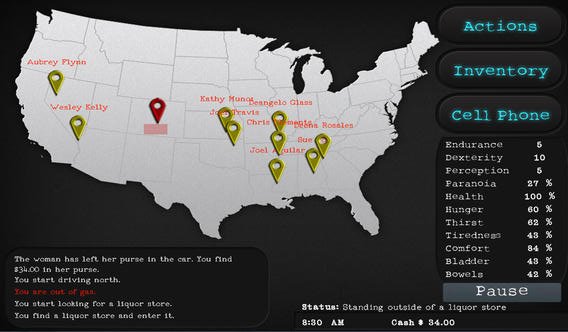 I was pretty intrigued by the concept of On the Lam, a game that has just been made available on iOS for the “regular” price of 99 cents: you are a criminal on the run, challenged with escaping the police forces for as long as possible. You’re always under pressure, you only have your instincts to follow and a lot of unexpected things are ready to happen. Add to that the fact that the developers said that they studied cases of criminals on the run for delivering a game that’s as close as possible to being on the run, and you’ll have reasons, just like me, to be really interested by On the Lam.

And then you are greeted with this message: “This developers of this game do not support etc etc” The first sign that you might not be getting quite the experience you were expecting…

And indeed you don’t, although the developers did try their best and there is some substance in this game. Just reading the “How to play” guide, which is all text, will take you 5 or 10 minutes, and that’s a lot of information to start with, and you’ll be as confused as you would’ve been if you didn’t read anything.

In my case, after I started my first game, I was caught after 4 in-game hours. I didn’t even leave the crime scene, being amazed at all the things happening and trying to figure out what to do next. My second try was better and I lasted 8 hours. The third try saw me on the run for 4 straight days before dying of hunger. But I was getting better!

On the Lam is not a game for everybody: gameplay wise, you don’t really have a lot to do but to select what your next action should be. There are no shiny graphics and there’s not much color either in the game, but the minimalist approach does well – since you’re always in a race around the clock and you always have so many things to do and consider, any distraction could be fatal.

Even though the game doesn’t manage to offer you the feeling of much control and even though extremely random, all the events seem, paradoxically, scripted, the longer you manage to stay alive in the game, the bigger the pressure you’re feeling. Probably that’s why most criminals on the run get caught after doing something extremely stupid: the pressure does get to you and fortunately the game manages to bring a bit of that into your soul, which is its biggest accomplishment.

However, everything is too random and you don’t really have much to do to turn the odds in your favor: the most common thing that happens is to be signaled by a cop’s car, even if you are not in a stolen vehicle. You can try to run and you can get caught – it’s random. The silly and funny thing happened to me in one game, when a cop’s car started to signal me. Since my crime hadn’t been reported yet, I decided to pull over. For some reason, the cop captured me and it was game over. So, yeah, you could expect some really crazy and unnatural things to happen in the game too – like a game breaking bug that doesn’t let you do anything once you are in a motel and you will eventually die of hunger or thirst or boredom…

But overall On the Lam delivers a decent experience if you’re a lot into reading and strategizing on the run. It’s not going to get any game of the year awards soon, but it’s very original in approach and with some tweaks and polish, it can turn out into one of the most atmospheric and enjoyable games in recent times. Hopefully the devs won’t abandon it and instead make it better!

On the Lam Review (iOS)