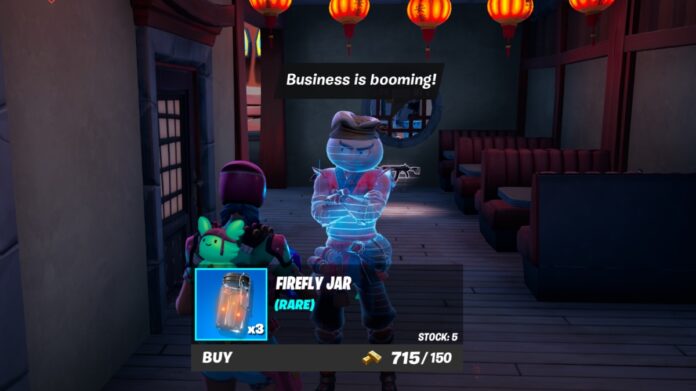 Non-playable characters (NPCs) in Fortnite are dotted around the map ready to help you out in any way they can. Some can be hired as a teammate, some can be challenged to a duel, and they all have items for sale. Most of the NPCs from Chapter 3 Season 2 have returned, with a few newbies arriving for Chapter 3 Season 3. Find out where to locate each NPC below!

Each NPC sells different items or offers different services. Check each image below for what they might have to offer when you meet them.

Can be found at Rave Cave and offers a Heavy Sniper Rifle, a Repair Torch, and Shield Keg.

Can be found at his old haunt at Coney Crossroads selling Shield Fish, Shrooms, and Prop Disguise.

Is located at Greasy Grove as usual, selling a Shield Keg, Meat, and a Two-Shot Shotgun.

Mancake can be challenged to a duel at Rocky Reels.

The Imagined is west of Rave Cave at Seven Outpost V selling a Hammer Assault Rifle, a Shield Keg, or the chance to Tip the Bus Driver.

This new guy is at Chonker’s Speedway where you can hire him, or buy vehicle mods like Cow Catchers and Chonker Tyres.

Haven is located west of Coney Crossroads at Rideline Ranger Station. She is selling a Rift-To-Go, Klomberries, and is for hire.

Related: How to Unlock Indiana Jones in Fortnite

Only one of these guys spawns at The Joneses at a time. You won’t be able to know which one until you visit them! They each offer slightly different items. Jonesy the First, for example, is selling The Dub, Cow Catchers, and is for hire.

Rustler is found at Shifty Shafts and is selling Corn, Meat, and a Harpoon Gun.

Just like at The Joneses, these three only spawn one at a time at Shroom Chalet, west of Reality Falls. Each offers something different. For example: Quackling is selling Shockwave Grenades, an SMG, and is for hire.

Our fishy friend hangs out at his restaurant in Sleepy Sound and sells Jellyfish, a Fishing Rod, and is for hire.

The Foundation is now at Seven Outpost VII near The Sanctuary. He sells a Striker Burst Rifle, Cow Catchers, and Chonkers.

Paradigm is wandering around the Seven Outpost II northwest of Logjam Lumberyard, selling a DMR, a Repair Torch, and Grenades.

The Origin is northeast of The Daily Bugle at Seven Outpost III. He is selling a Combat SMG, Harpoon Gun, and Cow Catchers.

The Visitor is at the Launchpad, the largest island northeast of The Daily Bugle. He sells a Rift Activation, a Heavy Sniper, and Storm Forecasts.

Kyle is another newbie NPC and can be found Logjam Lumberyard. He sells a Chug Canon, a Tent, and Apples.

Only one of these NPCs spawns at The Temple (near The Daily Bugle). Find Sunbird at daytime and Moonhawk at night. The items vary but you can get a Shadow Tracer, an Assault Rifle, or Shockwave Grenades.

Those are all the NPCs we have found! If any more are added throughout the season we will keep you updated. Good luck.