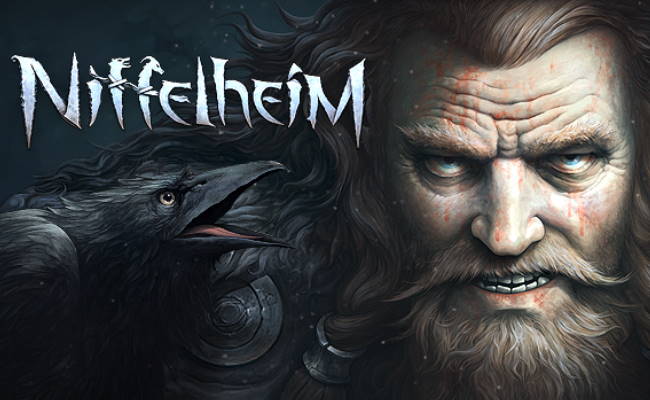 “With faithful sword and his fate in his hands, he enters Niffelheim – the harsh land of ancient spirits.”

You were a heroic viking warrior in your past life, but even the bravest warriors must meet their inevitable end. Your body was placed in a funeral ship, set off to sea to burn in a conflagration of holy flame. Your soul was meant to cross over to Asgard, the legendary realm of fallen heroes, but meddling demons from the dark have captured your soul! With your soul abducted, you now find yourself reborn in the merciless land of Niffelheim. Your only hope now is to recover the fragments that open the path to Valhalla!

Niffelheim is a 2D survival base builder game from Ellada Games, known for their previous work on titles such as Spaceland and The Tiny Bang Story. As the recently reborn viking, your goal is to survive in the harsh wastelands of Niffelheim while recovering fragments of Valhalla’s portal.

Upon starting a new game in Niffelheim, you’ll be asked to choose a starting location. There are four main areas in the game – Ancient Bear Mound, One-Eyed Wolf Forest, Moor of the Desert Eagle, and Ice Dragon Wasteland – each with their own unique layout of geographical features and resources.

You’ll then choose one of the four character classes: viking, valkyrie, berserker, shaman. Each class has their own unique stats, but the main differences is that some classes deal more damage, have more health, or get hungry faster, so there is some variety between them.

At this point you’ll be dropped into the game and a bunch of tutorial screens will show up. Niffelheim has a bit of a learning curve, and it doesn’t help that there is a bit of information overload for new players at the beginning of the game. Aside from the tutorial screens (that can be referenced at any time), Niffelheim lets you take the reins and doesn’t interrupt you any further.

The front-loaded but hands-off approach to the beginning of the game is a double-edged sword. I did enjoy being able to roam around freely and figure out a couple of things for myself, but I also did feel overwhelmed when it came to deciding what to build first.

Your castle consists of your citadel, which is where all of your workshop stations are located. The castle also has walls and towers that can be used for enemy defense. You also have two spots on the sides of the castle that can be used to build resource generation buildings, like farms and animal barns.

Inside the citadel, there are four workshop stations. Combining that with the castle, the walls, the tower, and the two spots, there are exactly nine things you can work towards right from the get-go, which adds to the overwhelming feeling of not knowing what to plan for first. Regardless, I pushed onward and venture out to gather materials.

Niffelheim is completely 2D, so you only move left and right. The sprite work in Niffelheim is downright gorgeous, though the animation feels a little lacking. The character sprites and background art are absolutely fantastic, but your character moves like a stiff board and has that unnaturally smooth “flash-tween” style of animation.

While out in the wilderness, I encountered some skeletons and probably the biggest shortcoming of Niffelheim: its combat. You have an attack button and block button, and that’s pretty much the depth of combat. There’s no weight or power to your attacks; you kind of just hold down the attack button and wait until the enemy is dead. Blocking is really only necessary during boss battles, and even then your shield will probably break in the middle of the fight.

You do, however, gain more stats once you fight enough. Your personal attribute progression works like classic RPGs: you get better at specific actions the more you do them. Fight a lot? You gain more resistance and defense. Practice a lot of alchemy? You get natural poison resistance thanks to your familiarity with herbs. Your two main stats, health and satiation (hunger) increase with just about anything you do, ensuring that your character does not fall behind in general progression.

So, the one thing to take from all of this is that Niffelheim’s combat is supposed to be taken as a means to an end. The real meat of the gameplay is all about planning for every scenario you might find yourself in, and preparing for them. This sounds great on paper with this being a survival game, but there are some problems that stand in the way of this design philosophy.

The attribute growth is a nice and balanced progression, and it leads to an enjoyable gameplay loop of exploring, gathering resources, and getting stronger in the process. Aside from fighting, you’ll find yourself spending most of your time in this game gathering materials to build up your castle more. Discovering new materials, refining them into better materials, and using them to build up the castle was fun initially, but the whole process will reveal quite a few nitpicks about the game’s core design.

For starters, inventory management is quite the hassle. The inventory screen consists of several tabs that breaks your inventory down into categories, with each tab holding several small boxes for items. The inventory interface definitely feels like it was not designed with mobile devices in mind, as I found myself accidentally tapping the wrong item often.

The next major thing is that once you’ve collected your materials, you’ll have to use them inside the castle workshop. There are four different stations, and they are laid out in one long horizontal stretch. Running between them takes a bit of time, and eventually it begins to be a little annoying. This problem is compounded by the fact that a majority of the crafting recipes require components from different stations, so you’ll find yourself running back and forth a lot.

Eventually you’ll have to head down into the mines or one of the game’s many dungeons in search of precious minerals and portal fragments. Dungeons/mines are straightforward affairs – they consist mainly of long corridors with tunnels that take you down to the next floor. Dungeons can go on for quite a while, so you’ll have to make use of the map to find your way back.

Dungeons are often filled with holes in the walls that let in poisonous miasma that slowly drains your health, so you’ll need to avoid them to stay healthy. It’ll also take you some time if you want to climb back up to the surface, as you’ll need to retrace your steps. The game encourages you to get around this by using a consumable door item that lets you place a door that takes you down to the next floor wherever you want.

While this is greatly appreciate and saves you a lot of time, eventually our dungeons ended up looking like a complete mess thanks to all the doors sitting around. I just wanted a quick way back to the surface and to the deepest floor I’ve reached, and it seems like the entire process is just a clunky fix to a core level design issue.

Niffelheim plays out in real time, so whether you’re delving the dungeons or foraging for supplies, time is constantly moving. The game will throw events as you, like a horde invasion from time to time, and you’re given a few minutes to prepare for them. These moments were pretty exciting, because you get to test out your castle’s defenses and put all that gear you’ve crafted to work.

If enemies manage to break through your defenses, they’ll plunder the supplies from your workshop chests, which makes it feel like a lot is riding on these events. These horde invasion events are much more fun to deal with than the actual dungeon bosses due to the game’s rather mundane combat system. You’ll eventually also have to deal with harder versions of the events called ultimatums, and these feel even more dangerous.

Niffelheim is a gorgeous survival base builder that has a lot of potential in its core survival mechanics. The game has a rocky start, and while the core loop of scavenging and improving your character is enjoyable, a number of mechanics that weigh down the entire experience.

Niffelheim is available now on iOS, PC, Xbox One, PS4, and Nintendo Switch.