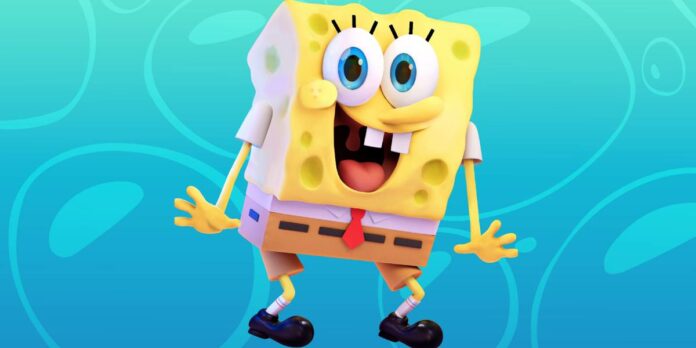 How to Play SpongeBob

Being arguably one of the most popular NickToons, it’s only fitting that SpongeBob is a well-rounded character with no obvious strengths or weaknesses. He’s quite the agile sponge, and his moves are pretty fast and easy to combo with.

SpongeBob has a simple projectile to attack foes from afar, and his quick light moves and powerful strong moves make him a capable contender in close-quarters combat. His recovery move is great too, so never count SpongeBob out of the fight.

SpongeBob’s balanced moveset makes him the perfect character to start out with if you’re new to the game or to platform fighters in general!

Horizontal Punch (5%): Punch forward. Fast and reliable, and can juggle an opponent if their damage is high enough.

Up Kick (6%): Kick upwards and launch opponents in a short arc, making this move a great combo starter. For example, it can be chained into Jellyfishing Swing.

Floor Sweep (7%): Sweep the ground and launch opponents up and away. Excellent combo starter at low percent, and it can even combo into itself!

Split Kick (6%): Kick out to the left and right. Good coverage if you’ve got opponents on both sides of you.

Aerial Up Kick (6%): Kick upwards while midair. Comes out quickly and has minimal launch power, making this move great for extending aerial combos.

Big Punch (8%): Slam down while midair. This move will send opponents plummeting down if it connects, making it great for intercepting recovering opponents.

Spin Attack (5%): Spin into your foe at high speed. Not very strong, but when it hits, it can immediately be canceled into any other move!

Jellyfishing Swing (13%): Swing a net to the side. The net has great reach, so use this at a distance.

Kah-Rah-Tay Uppercut (14%): Uppercut the opponent with a red karate glove. The uppercut is a tad slow, but it’s got great launching power, making it a strong combo finisher. You can wind it up as your opponent is coming down from a previous hit.

Imaginaaation Clap (16%): Clap your hands and make a rainbow! The initial clap and the resulting rainbow both have hitboxes, so even if you miss with the clap, there’s a good chance your opponent will get grazed by the rainbow.

Aerial Jellyfishing Swing (14%): Swing a net to the side midair. Functions just like its grounded counterpart.

Imaginaaation Kick (15%): Kick downward midair. Unlike Big Punch, this move slows SpongeBob’s fall, which might make it easier for you to line it up. This move also has much greater spiking power than Big Punch.

Bubble Blow (7%): Blow slow-moving bubbles forward that have minimal launching power. If there are more than two bubbles on the screen at once, SpongeBob will blow bubbles slower than usual. Use this to pester a distant opponent!

Order Up (4%): Spin a spatula so fast you propel upwards, hitting anything caught in the way up to four times. Good vertical recovery, and you can also steer it for more horizontal recovery. You can use Order Up as an anti-air, but be careful doing so because it’s easy for opponents to fall out of the combo, and you’ll be left wide open!

Chomp (5-26%): Reel back and chomp forward. Hold down the special button to charge it up—the longer you charge, the further SpongeBob will chomp, dealing more damage. Can be used as a very effective edge guarding tool when your opponent is trying to recover back to the stage.

That concludes our Nickelodeon All-Star Brawl SpongeBob guide. We’re sure many of you have some more tips and tricks with SpongeBob, so please let us know in the comments!