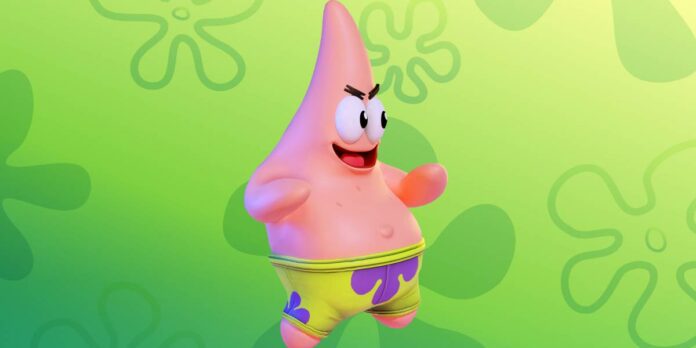 Nickelodeon All-Star Brawl has finally arrived! Duke it out with all of your favorite Nicktoons, including classic heroes like Powdered Toast Man and newer stars like Lincoln Loud! Of course, we can’t forget about SpongeBob SquarePants and his dimwitted yet lovable friend, Patrick Star. Today, we’re all about wondering if mayonnaise is an instrument, as we’ll be going over Patrick in our Nickelodeon All-Star Brawl guide on how to play Patrick!

How to Play Patrick

Patrick is a hefty guy, and that is reflected in his attacks. While he’s still kind of an all-around character like SpongeBob is, many of his moves are a bit sluggish and have more startup frames to them. To compensate, Patrick’s overall damage is much higher, so landing hits with him is going to hurt!

Patrick also fits the “grappler” archetype that is seen in a lot of fighting games. All of Patrick’s special attacks will grab opponents, and they cannot be blocked! This makes Patrick quite scary to deal with upclose, so you’ll always want to keep your opponents nearby.

The general strategy with Patrick is to stick to your opponent and soften them up with your special attacks. Use your light attacks to set up simple combos, and always remember that opponents that miss a ground tech get stuck on the floor momentarily, and they can be grabbed with your specials! Once your opponent’s damage is high enough, it’s time to go in for the finisher with his strong aerials and ground attacks.

Patrick may be a little slower than the other all-stars, but if you like big boy brawlers that enjoy getting up close and personal, Patrick is your guy!

Belly Bump (8%): Patrick bumps his belly forward. Has a bit of a slow startup compared to other lights, but it’s more powerful to compensate and has a big hitbox. Belly Bump can hit opponents that are directly behind Patrick!

Snack Time (7%): A quick Krabby Patty uppercut. Launches opponents in a small arc away, which makes it a great combo starter.

Toot Laser (9%): A fast butt laser that hits the ground in front of Patrick. Toot Laser has the most range out of all of Patrick’s ground light attacks, and it’s pretty fast too, though it doesn’t work too well as a combo starter.

Side Kick (10%): A swift kick to the side. Has minimal launching power, so it’s great for extending aerial combos. You can carry opponents across the stage with Side Kick.

Down Swing (9%): Slam down quickly in the air. This move comes out fast, and it launches opponents down, making it a great interceptor. You can combo it easily with Aerial Snack Time.

NO IT’S PATRICK (17%): The classic meme, now an attack! Patrick slams the phone down in front of him, dealing pretty good damage. This move unfortunately has a lot of recovery frames, so if you miss with it, you might be in trouble!

Trophy Hat (19%): Patrick holds up with trophy high in the sky, dealing heavy damage. It also has quite the recovery time, so use it wisely.

Belly Flop (18%): Patrick performs a powerful body slam. Has slow startup and long recovery, just like his other strongs.

Star Spin (13%): Spin around like a wacky starfish in the sky. Star Spin comes out fairly quickly with a surprising amount of active frames and a rather large hitbox, meaning overeager opponents may be caught off guard.

Aerial Trophy Hat (18%): Patrick holds up his trophy towards the sky… but while also being in the sky. Functions just like the ground counterpart — slow startup included — but it also slows down Patrick’s descent, which lets you line it up easier. Deals great damage and has amazing launching power, and with the added benefit of it being an aerial, you can kind of move Patrick to avoid misses, unlike the ground counterpart.

Cone Crash (20%): Patrick dons his ice cream cone and, after a brief moment, slams down into the ground directly below him. While this move does an amazing 20% damage, and it spikes opponents downward, it’s very predictable and Patrick is vulnerable during the transformation and after he hits the ground.

Spinning Lariat (13%): This one’s a bit deceptive. Patrick spins his arms wildly towards the opponent, but despite the animation this move has some startup time, meaning it won’t actually connect until Patrick has completed about one full rotation. We recommend using Spinning Lariat earlier than usual if you’re using it to approach your opponent, as using it too late will probably cause you to be interrupted by a quick light attack. Despite this, Spinning Lariat is usually a safer option to use compared to Star Wheel since it has a bit more active frames.

Star Slam (8-24%): Patrick lunges forward and grabs an opponent. If it connects, Patrick will slam them down behind him, and he’ll do it two more times if you mash the special button. Keep in mind that opponents on the floor or midair can be grabbed, and it’s an easy way to rack up damage.

I’m Already A Star (17%): Patrick shines bright briefly, then launches himself in the direction of your choosing. You can aim Patrick by moving the control stick in the direction you want him to go. If Patrick collides with an opponent, he’ll grab and throw them. While this move is great for recovery and offense, trickier opponents may try to catch you at the apex of your launch, so be careful!

Hugdriver (22%): After a brief windup, Patrick grabs an opponent in front of him and jumps into the air, slamming them into the ground. If used near a ledge, you’ll dunk yourself and your opponent off the stage!

That’s it for our guide on Patrick in Nickelodeon All-Star Brawl. If you’ve got any other strategies for Patrick, let us know in the comments below!