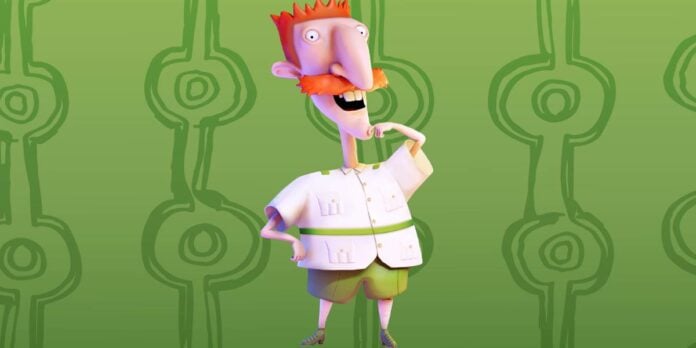 Nickelodeon All-Star Brawl is about to get a little more smashing, because Nigel Thornberry from The Wild Thornberries is here to play! Nigel has devoted his life to studying nature and wild animals, and he even hosts his own nature show to educate the masses about the wonder that is Earth. Nigel moves like an animal on the battlefield — all of his moves are themed after various creatures, which gives him a very interesting play style. We’ll show you how to master the man of the wild in our Nickelodeon All-Star Brawl guide on how to play Nigel!

How to Play Nigel

Nigel Thornberry has grown in infamy over the past years, mainly due to his meme-worthy design and attitude. Nigel spends his time traversing the wilds to find his next nature topic, and this mentality is reflected in his moveset, which is completely animal themed.

Nigel Thornberry, at first glance, seems like your typical close-range melee fighter… but there’s more to him than meets the eye! His animal-like stances and fighting moves make him quite unpredictable, and some of his moves have rather strange hitboxes. When played right, Nigel’s opponents will never know what to expect next!

Many of Nigel’s moves deal high damage, but they don’t have much launching power, so you’ll find that chaining attacks together with him flows very smoothly. This works out for him, since Nigel is a bit slower than the rest of the cast, though not by much.

Nigel’s normal attacks are strange and powerful, but his specials are nothing to scoff at either. The Worm lets Nigel act like a, well, worm and evade all attacks in the game. Properly timed, The Worm can completely stuff powerful attacks while giving Nigel some breathing room. Smashing is a seemingly inconspicuous special move, but it deals heavy damage if you can land a hit. It requires precision accuracy and timing, so use it with care!

Nigel is an unusual fighter with strange moves, but that’s what makes him so much fun to play as. His unpredictable and game-changing specials can really turn the tides of battle, and his animal-themed normal attacks pack a surprising punch. If strange but cool fighters are your jam, Nigel is your guy!

Presenting: Nature! (5%): Nigel holds out his hand and glows, dealing damage. Thought his move looks quick, it has a lot of recovery lag, so this move is a bit risky to use in close-quarters combat.

Mosquito Clap (8%): Nigel claps his hands together over his head. Mosquito Clap comes out quick and does decent damage, and it has very little launching power, so you can follow up with a strong ground attack.

Frog Hop (8%): Nigel crouches down and leaps forward like a frog, headbutting anything in the way. The range and speed of this move is very surprising, and you can catch an opponent off guard easily. This move easily chains into Bull Horns!

Gorilla Charge (8%): Nigel performs a dashing arm tackle. This move is quick to come out, but it’s got a bit of recovery lag, so be wary if your opponent blocks this.

Woodpecker (2-11%): Nigel rapidly pokes his head forward, hitting multiple times for a little damage with each hit. This move is great for racking up damage, and it has minimal launching power, so you can usually get a few Woodpecker strings in one jump.

What’s Over There? (8%): Nigel raises his arms into the air. Deals good damage, but the best part is the low launching power, which means you can chain this with another up aerial attack or a Woodpecker.

Falcon Dive (10%): Nigel assumes a falcon’s form and dives downward at an angle. Falcon Dive’s hitbox covers almost all of Nigel, so it’s a great move to use as a finisher. This move sends opponents downward, and chaining multiple dives together can send an opponent into the abyss with no chance of recovery. Just be mindful you don’t go too far down yourself!

Orangutan Punch (14%): Nigel crouches down and assumes his best orangutan form and lets out a hefty punch. Comes out quickly and has a bit of active frames, so it’s a reliable and strong attack.

Bull Horns (13%): Nigel uses his hands to form horns and rears up like a bull. Comes out a bit faster than Orangutan Punch, and it launches opponents in a very tight arc, making it a good combo starter.

Scorpion Sting (13%): Nigel bends his legs in a way unimaginable and kicks forward, mimicking a scorpion sting. Sends opponents away in a wide arc, so it’s suitable as a combo finisher. This move has a large hitbox, and it can even hit opponents that are behind Nigel, as long as they’re directly next to him.

Crocodile Wrangling (13%): Nigel summons a crocodile and uses it like a surfboard, damaging anything he collides with. The crocodile comes out fast and has some pretty good range, so it’s a fantastic combo starter. Thanks to dash attacks canceling into anything, you can chain something like Bull Horns right after the crocodile hits.

Tea Time! (13%): Nigel elegantly sips a cup of tea in the air. Tea Time does pretty good damage, and it has low launching power, meaning it can be used to vertically juggle opponents.

The Worm (No damage): Nigel wiggles his way a short distance forward. During this time, Nigel is completely invincible and cannot be harmed or interrupted. The Worm has a substantial amount of recovery lag, so don’t expect to spam this move and get away with it. Using this move with good timing however is crucial to Nigel’s slippery and unpredictable play style!

Whale Crash (18%): Nigel jumps into the air with the grace of a whale, and falls down with the weight of one as well. Whale Crash gives Nigel great vertical recovery, and anyone that tries to intercept him on his way down will be crushed.

Smashing (28%): Nigel snaps his fingers — similar to that of an infamous villian from the Marvel universe — and a bright flash pops from his fingers. If an opponent is right next to Nigel when the flash occurs, they’ll take heavy damage and be launched away at high velocities. Landing Smashing on an opponent above 50% damage will almost always KO them!

Smashing is an extremely high-risk, high-reward move: if you miss with it, Nigel is left wide open for a couple of seconds, so only use it if you know for sure you’re going to land the hit. It is the ultimate finisher in the right hands because it comes out almost instantly.

That’s all for Nigel Thornberry’s moves in Nickelodeon All-Star Brawl! If you have any other tips or tricks to share, let us know in the comments below!