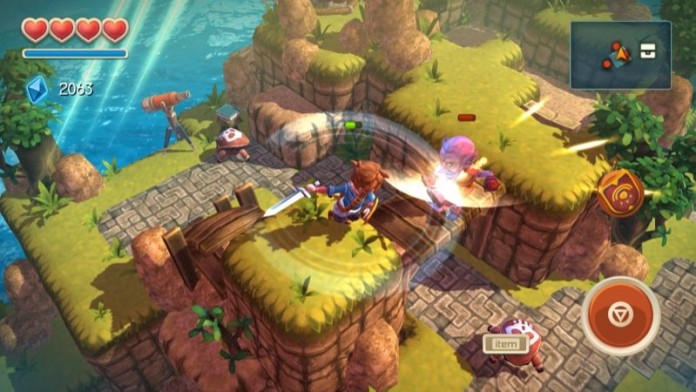 It feels like Christmas came early with the great new releases available for iOS this week. The long awaited (and I do mean long!) Oceanhorn is finally available for download, as well as Epoch 2, Football Manager Handheld 2014 and many more games that will keep you really busy this week and for the weeks to come.

So let’s take some time to check out the hottest game releases of the week of iOS and decide which games to buy. Hopefully, you’re not on a budget, because there are quite a few titles to get this week!

Probably the most anticipated game of the week, Oceanhorn: Monster of Uncharted Seas is a Zelda-like RPG that embarks you on an epic journey in the islands of Uncharted Seas. Prepare to explore the islands, take on donzens of smart puzzles, collect items along the way and, of course, fight monsters. Here’s a bit of what Oceanhorn is about, after spending two years in the making:

Created by Uppercut Games, Epoch 2 is a cover-based shooter with robots. This alone is probably enough to make it a must buy product, but there’s actually more depth here: New weapons, items and features expand your arsenal and give you new strategies to employ. Equip your Weakening Grenades, risk a Fast Reload for bonus damage, or head-shot an enemy robot with your Sniper Rifle? New levels extend and expand EPOCH’s ability to fight, move and dodge. New Play Modes provide tougher challenges for the elite EPOCH player.

The light version of the popular Football Manager 2014 PC game has been released for iOS by Sports Interactive today and this is a game that all fans of the series will want to play. Probably not as user-friendly for newbies to the genre, but FM 2014 handheld already has such a huge following that SI can get cocky and focus less on new customers. Either way, in case you didn’t buy it yet, here it is:

Lone Wolf is back (not Lone Wolf McQuade, unfortunately)! We’re talking about a gamebook here with an interesting approach to battle sequences: a series of quick time events shown in beautiful 3D graphics. Whether you are a veteran member of the Kai Order, or a new member of the pack, Joe Dever’s Lone Wolf will engage you with an epic story, compelling combat, deep character customization and great replayability!

This game comes with a great concept and hopefully doesn’t mess up with the controls on out iPhone or iPad – because poor controls can really destroy a game where it’s all about sneaking past enemies and quickly solving puzzles along the way. Probably it would be best to wait for a few reviews before getting this one.

Cyberpunk FPS for iOS – the description of the game sounds good and is scary at the same time. Sounds good because of the “cyberpunk” thingie, but is really scary thanks to the “FPS of iOS” part. We all know that shooters on mobiles don’t work well yet, but this one might just give us enough Pros to give it a try. Like great graphics and same device multiplayer. Good enough? It’s up for you to decide!

Tear through wave after wave of the walking dead as you fight for your life in an industrial playground filled with deadly traps and deadlier enemies. An intense top down survival shooter, bringing console quality graphics to your mobile device.

A surreal and paranoid story guides you through one of the deepest and most difficult dungeon RPGs ever made for iOS. 18 playable characters, 9 classes, over 50 abilities, 45 artifacts, 128 unique monsters, and 130 levels means this game will keep you busy for some time. Completely retro and entirely cool.

And these are our top released of the iOS platform this week. We really have a bunch of games to choose from, so let us know which are your favorites by commenting below!