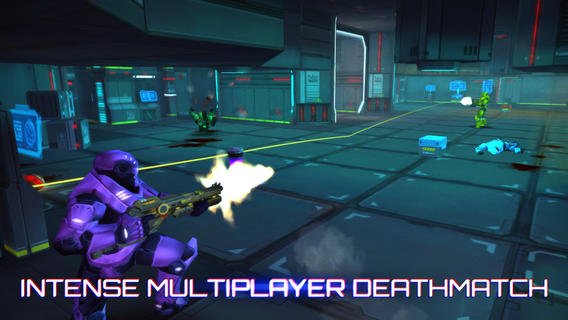 With the release of Neon Shadow, it’s time to suit up, grab a ridiculously oversized weapon, brush up on your wisecracks, and get ready to save the universe once more. On this occasion it’s the mysterious dark mechanoids who have vague plans to conquer humanity, but a complex storyline and deep characters aren’t really high on the agenda here. What we have instead is a simple, but undeniably enjoyable first-person shooter that wears its inspirations proudly on its sleeves and has fun doing it.

Neon Shadow is set largely upon a space station which has been taken over by the aforementioned dark mechanoids as part of their nefarious scheme. Unfortunately, the station needs to be taken back and this is where you come in.  Armed initially with nothing but a shotgun and your wits, you must proceed through the station and blast the myriad droids and automated gun turrets to pieces. As you progress, new weapons are discovered and new enemies show up just waiting to be introduced to them. There may well be some more narrative twists and turns, but to be honest, the storyline really isn’t this game’s strongpoint, and most players are likely to ignore the cut-scenes and dialogue and focus instead on the blasting action. 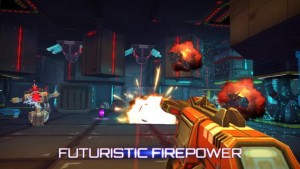 Speaking of which, this is where Neon Shadow scores more highly. Although it lacks the complexity and sophistication of other shooters, gameplay is fast and furious and highly reminiscent of old-school games such as Doom and Quake. The space station environment is somewhat unoriginal, as are the enemies, and although everything is rendered cleanly enough, the game lacks any particular visual flair, especially when compared to Dead Trigger or the N.O.V.A. or Modern Combat series. The controls however are nicely responsive and make exploration and shooting about as smooth as could be hoped. There are also some nice weapons to grab, all of which prove quite impressive and fun to wield, with the default shotgun in particular sounding off with a particularly meaty and satisfying roar.

One of the big draws of Neon Shadow is the promise of multiplayer deathmatches, both local and online, but unfortunately at the time of writing, I have been unable to test this due to a lack of available players. Hopefully, once the game picks up in popularity, it will be easier to find a game, and as long as nothing major changes from the main game, it should be an entertaining addition to a solid, if uninspiring, shooter.