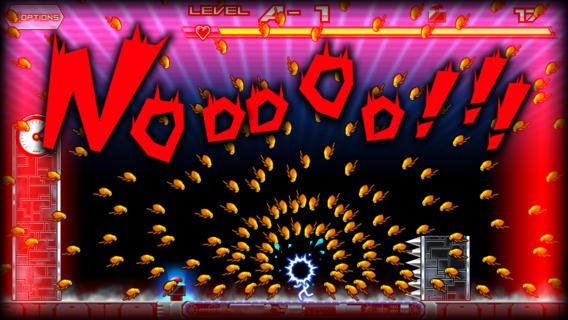 Mr NooO! is one of those games which appears to defy classification. It’s not a platformer, it’s not a shooter, nor even an RPG. It might be classed as an endless runner, but even if there is a genre which could be applied, one thing I am certain about is this: Mr NooO! is not good.

The game’s concept is simplicity itself: you control the eponymous Mr NooO! through a series of 2D static-screen levels, as he runs across an ever-moving conveyor belt. At one end of the conveyor is a button which Mr NooO! must touch to charge up a meter with electricity. Once the meter is full, the level is complete and the player advances. At the other end of the conveyor is a large spiked wall. No prizes for guessing what happens if you hit the spikes. To further complicate matters, clouds of ‘things’ (the developer’s description, not mine, and which look like giant fleas and bedbugs) bounce around at random, sapping the player’s health if they come into contact. And that really is all there is.

While the game is pitched as an ‘exhilarating action game’, the truth is anything but. The extent of the player’s control is limited to simply touching the screen to make Mr. NooO! run forward and charge up the meter, while letting go allows him to fall back and avoid the ‘things’. Many of the levels can be completed merely by holding the button down, without worrying about the flying nasties as they either don’t come close enough to cause alarm or just don’t do sufficient damage to harm the player. While later levels require some dodging, there really isn’t anything particularly exhilarating about it. Some challenge is provided by the difficulty of running forward on a backward moving conveyor but again the entertainment value is extremely lacking. Each level is virtually identical to the last, with only minor differences in colour scheme to differentiate them, so the game becomes very repetitive very quickly, both visually and in gameplay terms. 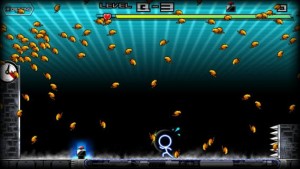 Graphics are functional and bland, lacking in character or imagination, with Mr NooO! represented by a simple smoothly animated stickman and other features limited to the conveyor belt, the spiked wall and the electrical meter, with much of the screen taken up by a dull black background. The ‘things’ are the only element which appear to have had any real time invested in their design, but even they are unremarkable given their lack of detail. Sound is similarly limited to a few basic effects and some raucous music which tries to add to the exhilaration, but which sadly fails to disguise the game’s fundamental flaws. There are no in-game purchases to be made, something which is rare in mobile gaming these days, but if you want to continue after dying, you are forced to watch random 30 second adverts for other games. Unfortunately for the game’s developers, these usually look much more interesting that Mr. NooO! and most players are likely to rush off and download them, rather than continue with the current game.

While simplicity is often the recipe for success, in Mr. NooO’s! case it only works against it. Players will soon realise there is no imagination, depth or substance to the game and even if you are only looking for a quick burst of action gaming, there is no excitement to be found here. There has to be something wrong when the developers use the game’s limitations as a selling point, just because they have nothing else to say (‘That’s all!). This could have been a good game if ideas and concepts had been developed further, but it comes across as a lazy attempt at cashing in on the current appeal of mobile gaming and ultimately must be considered a failure.

Mr. Nooo! is available now on the App store for free.