It has been some time since a new Monster Hunter game released on a Nintendo console, and it seems like that time is coming very soon.

During yesterday’s Nintendo Direct Mini, the Japanese publisher confirmed that Monster Hunter Rise is coming to Nintendo Switch on March 26th, 2021. The game, which will be the next main entry in the series, will introduce a lot of new features, like a new companion, a new grappling mechanic based around an insect called the Wirebug, new monsters and a world that is seamlessly connected.

Nintendo also announced a Collector’s Edition which will include extra goodies, as well as three new Amiibo figures – Palamute, Magnamalo, and Palico.

During the Direct, it has also been confirmed that Monster Hunter Stories 2: Wings of Ruin is currently in development for Nintendo Switch for a Summer 2021 release. The game will expand on the features introduced in the original game.

In case you missed it, you can check out the full Monster Hunter Direct revealing new information on the two recently announced games right below. 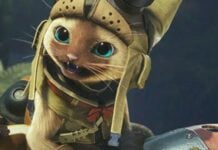