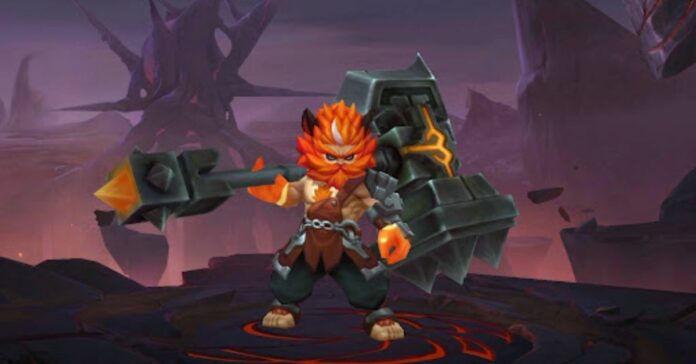 Aulus is a fighter-type hero from Mobile Legends. He is a very strong warrior that hits his enemies with an ax. This guide will tell you about his skills, best items, emblem set, and more.

Aulus is a fighter-type hero that has some great abilities to deal damage, engage the enemy, and survive some damage. He has four skills in the set. There are 1 Passive skill, 2 Active skills, and 1 Ultimate skill.

Fighting Spirit is Aulus Passive skill. It increases his attack by 9 and physical penetration by 3. The bonus stacks up to 5 times and improves your movement speed by 15% and basic attack damage by 125% when you’ve reached the max stack limit.

Aulus, Charge is his first ability. It increases his damage reduction by 30% and movement speed by 45%/47%/49%/51%/53%/55% for 4 seconds. If you cast the skill for the second time, Aulus will smash the ground, deal damage to opponents, and slow their movement speed.

The Power of Axe is the second ability. It hits the ground in front of him and deals damage to opponents. Also, it stacks if hits an enemy champion. After that Aulus can hit the opponent with 2 charged basic attacks that restore him 35 HP and swing with additional attack speed.

Undying Fury is the ultimate skill. It has the passive effect that upgrades the ax of Aulus each time you level up his ultimate. The first upgrade will give him 35 basic attack damage. The second will add 15% lifesteal. The third stage increases the attack range and the second skill’s range by 65%. When you activate Undying Fury, the champion hits the ground, deals damage, and leaves the fire trail. The last one slows opponents and deals damage to them.

The best items for Aulus in Mobile Legends are the following:

The best emblem set for Aulus consists of Agility, Invasion, and Killing Spree from the Assasin Emblem tree.