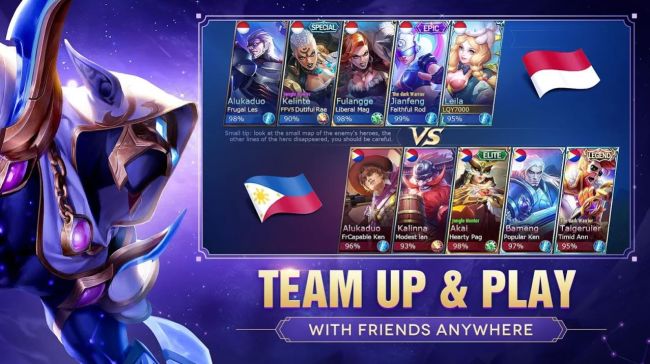 In today’s article we are going to tell you all of our Mobile Legends: Bang Band tips and cheats that we have gathered to help you win more matches and becomes much better at the game!

Because I’ve been playing a certain MOBA for years (yeah, you might know which one I’m talking about), I can safely say that I am quite familiar with the genre and what the winning conditions are! And because of that, no matter if you are a new player or an experienced one, you will learn a little bit about the game from today’s guide.

And to make things even better, I will tell you everything that you need to know about each role, so that you can also main one and try to get better by using a single role (getting MVP each game, and pretty much going 1v5 the enemy team). So… are you interested? I bet you are!

Therefore let’s not waste another second and dive right into the Mobile Legends: Bang Bang tips and tricks right here below and teach you everything that you need to know!

Learn the basics about the game

There are a few very, very basic rules which any game follows. By trying to make these work for you, you’ll most definitely win every single game. I will list them all below so that you can read and learn them, and try to remember them whenever you battle:

– You need to take down enemy out turrets, then inner turret and then the enemy Crystal (the base).

– Opponent champions will try to interfere, so you will need to either poke them down until they leave the lane, or to kill them straight up.

– Each champion has a different role that it can play, and if you really want to get good at the game, then you will master a handful of champions and use them in every single game. The only issue here is finding the right role for you – but don’t worry, we’ll cover this below.

These would be pretty much the basics of the game, in this order:

So no matter what you are doing in the game, this is what you should always keep in mind – getting the enemy Crystal, even if your team is feeding, is the main priority as long as you want to win!

Attacking minions is going to be your number one source of Gold in the game, at least at the very beginning. So you should never ignore it, because it is going to make a big difference. Having 30 minions above your opponent will mean a lot more items in your inventory which will result in more damage.

So try to keep that in mind because as soon as the minions spawn, you should make it a priority to attack and last hit them. Even if the enemies get the way, if they flee then you should ignore them and get back to your minions – that will result in you winning the lane pretty much and eventually the game!

Learn the right role for you

There are a total of 6 main roles in the game – they all have certain specializations, and if you find a certain champion that you like, then you should probably main that role. Here are the roles, as well as their explained lanes:

– Tank: They are mainly used for tanking the front line of the enemy offense – they will go in in first, and take a few hits while the back line of the team will destroy the enemies. The tanks usually either go Roam to help all lanes or go in the side lanes (depends on the secondary class).

– Fighter: Fighters are melee attackers who have a pretty decent defense and are usually able to hold a lane on their own. Fighters usually go on the side lanes or try to go farm resources in the Jungle.

– Assassin: Assassins are champions that take on the side lanes and have high burst attacks that pretty much destroy enemies within a second. They are good at carrying fights, but mostly when there are isolated enemies, and not 3-4 enemies vs the Assassin.

– Mage: They are ranged units who specialize in high magic attacks, crowd control spells or even burst magic damage. They can fight in the side lanes or go farm in the Jungle for resources, but most often they will do best in lane.

– Marksman: The Marksmen go in the Mid Lane, where they are free to farm and fight as they wish. They can help the team mates by dealing tons of damage from way back in the lane, without taking much damage.

– Support: The Supports are mainly roamers who are going to help every lane. They can heal, shield, inflict crowd controls and much more – depending on the type of Support. But all in all, they are going to just help keep the team mates alive.

Which role do you find most suiting for you? You should definitely give all of them a shot and see which one you enjoy the most.

Main just a handful of champions

Because as a competitive person myself, I find it best when you become really good at one thing and not a “Jack of all trades, master of none”, I really recommend that you pick just a few champions belonging to the role that you like and trying playing only them over and over again.

That way you will learn when to use their skills best, how to position yourself and how to better deal with situations when you are 2v1 or 3v1 even. I would suggest reading each of the champions’ pages and taking a look at their difficulty – don’t pick a difficult champion just because it seems “better”.

Easy to play champions are some of the best ones because they don’t have some crazy mechanics that you need to learn and once you master them, they are going to do just as much damage (if not more) as all the others.

If you are not entirely sure what to do, or if your internet is not in that great a shape, then try doing the dailies which request you to share the game, or to watch live streams and such. Basically the other dailies that do not require you to play games (if you are having a hard time actually playing). That way you will still claim soem rewards and will not fall behind that much!

This is another type of rewards that you can get – by simply staying online for some time you will be able to claim plenty of free chests containing all kinds of goods. Try to check out how much longer you need to wait until you can claim these chests, and make sure that you try to do it!

Unlock Emblems and upgrade them

The Emblems are some stats that your characters will start with in each game – they will empower your basic stats, so they are just as important as the items you purchase during battle.

There is a type of Emblem for each role, so try to unlock the one that you play as first. For me, it was Mage – so it was pretty easy to unlock it! But if you main more types of roles, then you will first have to level up to level 10 account to unlock more (more than the 2 you get at the beginning for free).

Don’t forget to check these out every time that you gather more materials or level up, so that you can upgrade them. That way you will be one step ahead of the enemies that don’t really know what to do (or haven’t read our guide yet)!

You can find the Emblems by tapping on the Preparation button in the bottom left corner of the screen -> Emblem.

There are some general free spells which you can equip on any hero – they will either boost your hero’s damage, make them faster, inflict CC or anything pretty much – they can be found int he Preparation button -> Spells.

They will unlock as you level up, so make sure that you read them carefully before each battle and equip the one that goes best with your champion.

When you are playing Tutorials you will be able to claim some free rewards upon completing them! I suggest that you try to go through all of the tutorials that the game offers (including the one in the Preparation -> Tutorial -> Jungle) because once you complete all of them you will receive plenty of useful rewards.

Now you might wonder what all the rewards are – well, for one, Gold! Which you can use to unlock new champions, so it is definitely something that you should look forward to obtaining.

During the matches, you will see in the upper right corner of the screen some equipment which you can purchase. You don’t have to be in the base to purchase the gear, but if you want to heal, you should definitely recall and go back.

I suggest that as first gear, you should equip something with a little damage no matter which class champion you play. That is, because you want to be able to farm monsters faster than your enemies. So any damage multiplier will greatly help with that.

Then, you should try thinking about what gear you want – one of the best items you can go for is the boost. That way you can escape unwanted fights and chase enemies much easier. Then, once you got these, you can start building towards your core build.

You can make custom equipment builds

Depending on the champion that you play, the game will recommend certain equipment. That way you will not have to spend minutes looking for certain pieces, and they will appear in the upper right corner of the screen.

However, if you don’t like the gear you are shown, you can select your own. Head on to Preparation tab -> Equipment Block and there you will see the type of build for every class. Select the one you like, and on the right side you can tap on the items you want to swap around.

I suggest that you read them carefully and not go for only damage – you will need some sustain in any situation and it should never be neglected.

These would be all of our Mobile Legends: Bang Bang tips and tricks that we have for you right now! Do you know some more useful battle tips and strategies that you would like to share with us? Leave them down in the comments section below!