Mitrasphere is one of the infamous RPG titles, set in a magical world amid the sky and the sea. The game was initially exclusive to the Japanese player. Later on, the developers ultimately launched the video game in the West as well. Being one of the most played gacha games, Mitrasphere is racking up millions of downloads every month. Since countless players are joining the active player base, most of them might be wondering what are some of the best weapons in each class.

Therefore, we’ve decided to pen down an ultimate guide on Mitrasphere Tier List. Before heading forward, it’s worth noting that the game boasts six different classes, Swordsman, Guardian, Cleric, Archer, Magic Device, and Mage. Moreover, we suggest everyone master the top-tier weapons of every class, especially those who are just getting started.

Note: The above list is purely subjective and based on the writer’s opinion and experience.

Here’s the Mitrasphere tier list for the Magic Device class:

Here’s the Mitrasphere tier list for the Archer class: 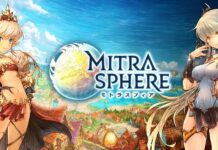