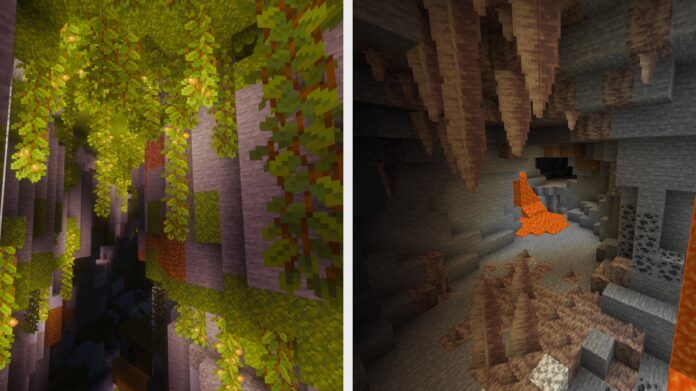 Minecraft’s Caves and Cliffs update was intended to be released in one part, but Mojang instead decided to split the updates into two—1.17 and 1.18. Update 1.17 was released in June, and the next part is due for release by the end of 2021. The first update included Glow Squid, Axolotls, Lightning Rods, and Spyglasses, and 90 new types of block, but the second half is going to bring so much more! Here is what features to expect from the Minecraft Caves and Cliffs 1.18 update.

Exploration below Y=0: For the first time, you will be able to dig below Y-Level 0 into what will be called the Deepslate Level. The new lowest depth will be -64, and between -0 and -64 you will be able to mine deepslate blocks and discover ore veins of diamond, gold, iron, copper, and redstone. As there will now be all this new space to explore, there will be a new biome introduced: the Deep Dark, home to Sculk blocks that emit a redstone signal if they detect vibrations, candles, and the Warden Mob (see below for more details on this powerful mob).

Lush and Dripstone Cave Biomes: There will be more to explore beneath the ground with the new Lush Cave and Dripstone Cave biomes. Lush Caves will be filled with vines, moss, Glow Berries, Spore Blossoms, Azalea trees and roots, and Dripleaf. Dripleaf is a new block type that holds your weight for a short time before it tips and lets you fall. Dripstone Caves is where you will find Dripstone blocks that grow naturally through a drip-like process, creating amazing stalactite and stalagmite-type structures.

Beware of the Warden Mobs: Warden Mobs are a pretty scary new mini-boss that comes with the new update. They spawn in the Deep Dark biome and, because they are blind, follow any sound made by you as you explore. Invisibility potions won’t help as the Wardens are already blind, so you will instead have to be sneaking if you want to avoid them. They are quick and powerful, so best to explore those regions with your best armor and weapon!

Bundle- the (sort of) Minecraft backpack: With 2 String and 6 Rabbit Hide, you can create a bundle. With this bundle, you can increase the different types of items you can hold in a slot. This does not increase stack space (the limit is still 64), but it does help you carry more of a variety of items which could be helpful to some players.

That is all for the news on the latest 1.18 Caves and Cliffs update coming soon. Until then, happy mining!