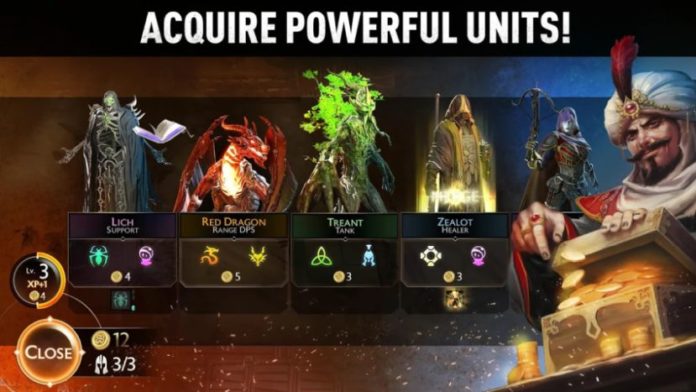 Knowing which are the best units in Might & Magic: Chess Royale gives you a massive advantage when it comes to selecting the right ones to send in battle. And when you have to choose from 25 units, things are getting a bit more complicated when it comes to sorting them out.

Now, in games like Chess Royale, it’s very difficult to tell somebody “This is the best unit, use it!” because there are so many more other factors to consider.

For starters, we have the synergy mechanics that can affect the performance of specific units (we talked about the M&M Chess Royale Synergies here).

But we also have units that, although really strong, are not only very expensive – but they also start appearing in the later stages of the game. So simply saying that the Red Dragon is the best unit in the game doesn’t help that much.

So how to create a tier list for Might & Magic: Chess Royale, when you might still be able to play and win battles if you don’t even have the strongest units in the game in your team setup? This is the real challenge!

I decided to mix and match and use my own experience playing this game when it comes to ranking these units taking into account not just their base strength, but also when they come into play.

This list is a mash-up between a traditional tier list and a “Best characters” list, also heavily influenced by factors like the availability of the units. The ranking system could be a bit broken because a Red Dragon will always beat a Justicar, but you do need the Justicar early on in order to get to the stage where you can actually recruit the Dragon…

Hoping that the explanations above make sense, here is my ranking of the best characters in Might & Magic: Chess Royale, from early on in the game to reaching the later rounds.

Massive damage dealer that is easy to star up early on in the game, in the 2nd or even 1st round. Not as useful later on in the game.

The stun spell is extremely powerful and building your squad to benefit from it can give you a massive boost. Pair Rune Priest and the Treant and you get easy victories all day long.

Note: most of the units here are really, really good. It all depends on what you get in your game, basically, and what synergies you’re trying to obtain.

My favorite early game unit. Deals massive damage and can take out enemies around her when her skill activates. A bit on a feeble side, but really strong.

Having a unit that attacks the furthest foe (usually a damage dealing unit) is a massive bonus.

One of the more useful tanks in the game early on. As I said already, pairing him with the Rune Priest gives you even more advantages thanks to the Stun. Just keep him alive long enough to activate his skill!

With dryads, things are not that simple: they are massive damage dealers, believe it or not, but not as useful if you can’t get them to 2 stars ASAP. With their healing and increased survivability, they are really good in most circumstances, if the odds are in your favor and you can star them up.

You actually get this unit very early in the game and it’s not useful to have the Hydra around just because it spawns two smaller hydras when killed, but also because it gives you the Dragon synergy and you start with 40+ mana!

One of the best skills in the game – only if you manage to keep him alive for long enough to activate it! The skill heals an ally and deals massive damage to ALL surrounding foes. OP for sure!

A massive tank that deals a lot of damage. If he manages to be surrounded by enemies when activating his skill, he’s lethal. And due to the high health, he has all chances to get there!

The final ingredient to the mix of the perfect Stun deck strategy: pair him up with the Rune Priest and Treant and you’ll wreak havoc on the battlefield even in the later stages of the game.

But even without companions, the Fire Giant is a real beast. When you start getting him, it might be time to start reconsidering your tank choice as he will probably be better.

He seems to be the favorite target of everybody on the battlefield, but if he manages to summon his minions, things get a lot more complicated for your opponent.

Probably the best unit and best tank in the game. Amazing skill, perfect in combat. Just look at the stats of the battles and see how well the Archangels do, to be convinced (if you need convincing).

Note about the characters I left out

In Might & Magic Chess Royale, any unit can be extremely useful in the right circumstances. So if they haven’t made it on the list, it doesn’t mean that you should never buy them.

I once had the option to buy 3 Battle Dwarves in round 1 and that went really well – taking me all the way to the top 5. Ghosts are good, Troglodytes are good, Orcs can prove to be very useful, the Swordmaster is crazy for boosting allies… all units are made in such a way to be useful under the right circumstances.

Still, I believe that you need to focus on some and prioritize if you have the option. And the recommended units above are the ones you should aim for, in my opinion.

Note about the best characters in M&M Chess Royale:

Starting the 5th round, you will start getting the rarer and more expensive units. This could be a good time to start selling some of the early units that are no longer useful and/or you haven’t managed to star up by this point.

Starting the 5th round – and especially the 6th – when the number of players remaining in the game is around 50 usually, the rarer, more expensive units (Purple and Orange) are becoming more useful and more common.

At this point, with the money you get from selling your weaker/not upgraded units in the game, buy them and try to star them up for massive boosts in the final rounds!

And now back to you – what do you think about my rankings, all things considered, and what unit would you rank higher on this list?