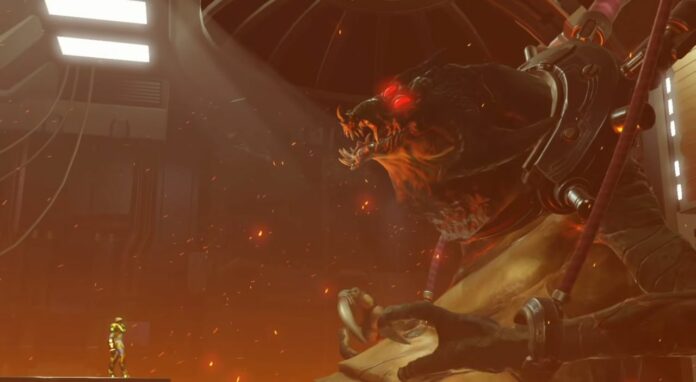 Boss battles in Metroid Dread are always incredibly intense, requiring players to discover the bosses’ weak points on the fly and devise strategies that allow the bounty hunter to continue damaging the enemy without getting damaged herself.

One of the bosses where offense and defense are strictly related is the Kraid boss fight. Here’s everything you need to know to take down this enemy without trouble.

How to Defeat Kraid in Metroid Dread

Kraid is fought in Cataris, right after getting the Varia Suit. This battle consists of two different phases, the second considerably more difficult than the first.

During the first phase, your main goal is attacking Kraid’s head with charged shots or missiles to damage it. As the boss’ arms are tied, it will try to damage Samus with different projectiles. These projectiles can be destroyed to get additional energy or missiles.

Damaging Kraid enough will make it go into its second phase. After the platform is destroyed by the boss, you will have to damage the wound on its stomach, which can be done with regular shorts as well as with charged shots and missiles. The boss will defend itself with more projectiles, which can be destroyed or avoided, and solid spikes, which have to be avoided by timing a jump properly. Jumping on a spike will allow you to use the Spider Magnet upgrade to get back to the top of the area so that you can attack Kraid’s face again. During this phase, Kraid will defend itself with more projectiles, which you will have to shoot down to continue staying up. At some point, Kraid will try using a counterable attack, so make sure you are ready to counter it and deal a good amount of damage. After dealing enough, Kraid will punch the wall, forcing you to drop back down and resume attacking the wound.

After repeating this sequence a few times, Samus will release Kraid and drop it into the lava below. Mission accomplished!

Metroid Dread: How to Defeat Kraid