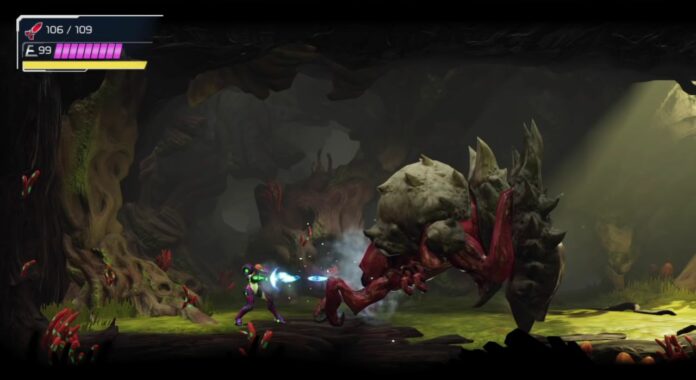 During her time on planet ZDR in Metroid Dread, Samus will have to fight all sorts of powerful creatures. As if the native lifeform of the planet wasn’t enough, she will also have to fight against those who have muted due to the X-Parasites, making them stronger and more deadly.

Here’s how to defeat one of these mutated bosses, Golzuna.

How to Defeat Golzuna in Metroid Dread

Golzuna is fought in Ghavoran, and it is definitely among the most challenging bosses in the game, due to the constant need of repositioning to deal damage and avoid getting damaged.

As soon as the fight against Golzuna begins, you will have to fight against lesser forms of the boss before it reaches its maximum power form. You will know it has reached its final form by looking at its massive size.

As the boss is essentially armored, you will have to attack it from the back to deal damage with any weapons. To do so, you can either jump over it and use Flash Shift or slide underneath it. Both options are safe if timed right, so you should have no trouble repositioning yourself safely after a short while.

Golzuna, however, doesn’t sit tightly waiting for you to take it down with your charged shots or Storm Missiles. Alongside an easy to avoid slamming attack, the boss unleashes some electric charges that go off in different patterns. To avoid damage from the rectangle pattern, jump and then use Space Jump to stay inside until the charges have gone off; to avoid the diagonal pattern, just jump and Flash Shift to the other side; to avoid the homing charge, just stay on the move as much as possible, jumping to the other side if needed.

Once you have learned how to avoid these charges, Golzuna becomes a much easier boss to take down. Continue attacking when the opportunity arises, and it will turn into its X-Parasite Form. Attack it and avoid contact, and it will soon become history.

Metroid Dread: How to Defeat Golzuna