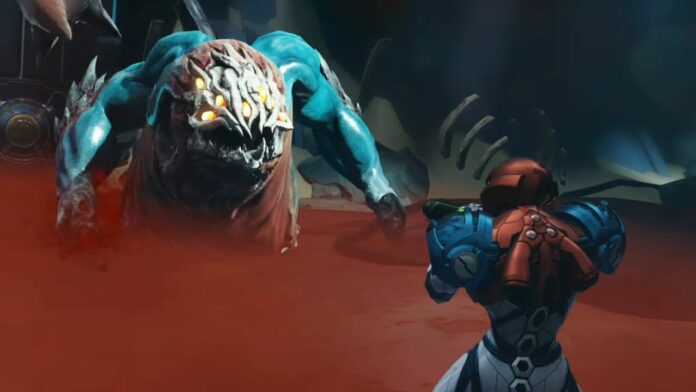 Planet ZDR in Metroid Dread is filled with all manners of dangerous creatures that cannot wait to sink their fangs into Samus. The legendary bounty hunter, however, is ready to take on each and every one of them with her powerful arsenals and the skills she has picked over the years.

Here’s everything you need to know to take down Corpius with ease.

How to Defeat Corpius in Metroid Dread

Corpius is fought in Artaria, and it is the first proper boss battle in Metroid Dread, not counting the E.M.M.I. you have encountered so far.

This boss battle consists of multiple phases where you will have to change your strategy accordingly. During the starting phase, you can deal damage to Corpius by shooting its face with charged beam attacks and missiles. Just make sure to avoid getting hit by its tail attack.

The next phase of the battle plays out like the first, only that Corpius has some new special attacks that will require you to attach to the magnetic area on the wall with the Spider Magnet upgrade to avoid them. Don’t stay there for too long, or you will be attacked. After dealing enough damage to the head, the boss will turn invisible and the tail glowing orb will appear again, so focus on that for the remainder of the fight.

After destroying the glowing orb, Corpius will turn again. Slide beneath it, and continue attacking it during the cutscene to destroy it for good. You will get the Phantom Cloak ability as reward.

Metroid Dread: How to Defeat Corpius