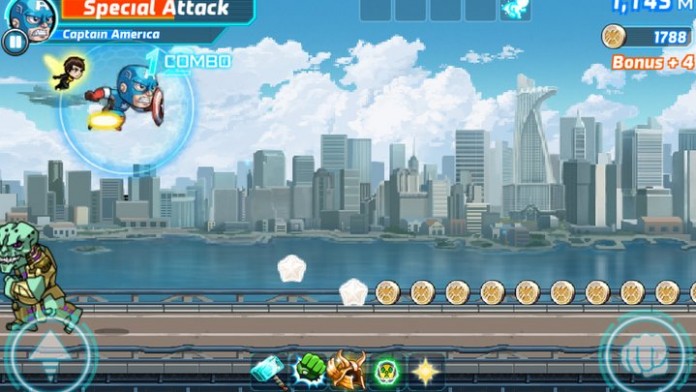 Last October, developer Disney Interactive said that its popular mobile runner title Marvel Run Jump Smash, which as the name infers features a cast of Marvel heroes in an endless runner gameplay environment, would be coming to U.S. iOS devices at some point in the near future (it originally launched in Korea). Well now it would seem that day has arrived because Marvel Run Jump Smash is available right now.

In Marvel Run Jump Smash, players can pick from a roster of eight different Marvel heroes: Hawkeye, Captain America, Captain Marvel, Black Widow, Thor, Iron Man, and Spider-Man (both Disney Interactive and Marvel have confirmed that more characters will be added in through post-release updates). Using each hero’s unique powers and abilities, players must race endless runner levels and collect coins which can be used to purchase special power-ups and boosts. Players can also switch between characters on the fly, allowing them to better navigate tricky areas of a given level.

Marvel Run Jump Smash is playable on most iOS devices including iPhone, iPad, and iPod Touch. It is available right now for $0.99 through the iTunes app store.