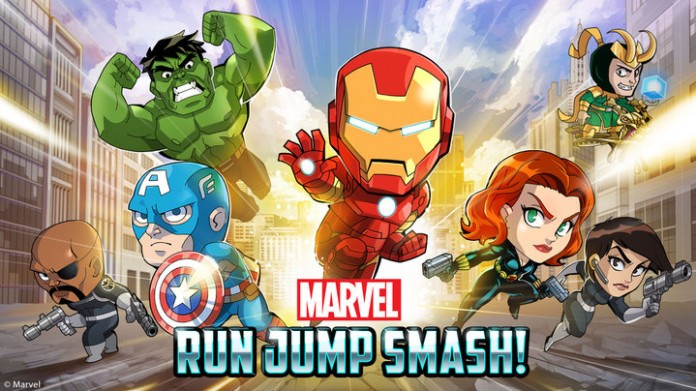 It can’t be denied that the endless runner series of mobile games, in which a player uses quick reflexes and anticipation to guide a constantly moving character through a series of environmental obstacles, puzzles, and enemies, has become one of the most popular mobile game formats to date. Now Disney Interactive has confirmed that Marvel’s take on the endless runner formula is officially coming to U.S. mobile players.

Marvel Run Jump Smash!, a fun kid-themed endless runner which tasks players with guiding various Marvel heroes such as The Hulk, Iron Man, Maria Hill, and Captain America through a virtual New York City in pursuit of Loki, has become very popular in Korea where it was originally launched. At this year’s Comic-Con, Disney Interactive unveiled the good news that Marvel Run Jump Smash!’s success in Korea has led them to develop a localized U.S. release.

Sadly Disney Interactive couldn’t confirm a solid timeframe for when Marvel Run Jump Smash! will be available for U.S. smartphones but considering the game’s massive success in Korea, I can’t imagine the wait will be too terribly long. In the meantime, interested fans can check out the below trailer to get a feel for how Marvel Run Jump Smash! plays.