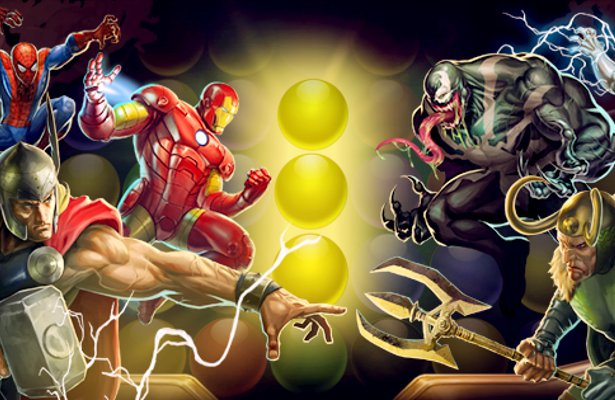 The Puzzle Quest series is one of the most unique gaming franchises ever released, combining elements from puzzle and role playing games. The resulting mix is unexpectedly fresh and engaging, adding some depth in the relatively simple puzzle gameplay formula.

With Marvel Puzzle Quest: Dark Reign, Demiurge Studios has gone even farther, adding the Marvel Universe into the mix. This is actually a really good idea since it definitely helps the game getting more recognition. But does the addition of Marvel Super Heroes and villains really add more to the game or is it just a cosmetic feature that has no impact on the gameplay?

Yes and no, because, while it’s true that some gamers will definitely like controlling they favorite character in a familiar setting, the characters don’t have a real impact on the game and its formula. They do have, however, an influence on the game’s plot, centered around the battle for ISO-8, a new chemical that can give great power to its holder. The game’s plot is really, really simple but it’s told in a lighthearted tone so is not offending, in the very least.

Marvel Puzzle Quest: Dark Reign features the same gameplay formula of the rest of the series. You will have to match three tiles of the same type to damage and defeat enemies as well as stop their special attacks by matching some special tiles, Bejeweled style. During battles you’re also able to choose which enemy to damage, adding a strategy depth to each choice you make during actual play. This will become incredibly important when you’ll have to deal with enemies with healing abilities. Randomly attacking enemies is not going to bring you anywhere.

Character customization is back in full force here and it’s definitely one of the most engaging parts of the game. Each character comes with different abilities and special attacks, adding even more depth to the game. The special attacks have all different effects and they will force you to think about when to use them to be more effective.

Unfortunately not everything is as good as it could have been. The thing is that Marvel Puzzle Quest: Dark Reign is a free to play game. The core experience is definitely nice but it’s built around the paid items, meaning that you’ll probably end up grinding for hours if you want to avoid buying anything. With the amount of paid items getting released, it doesn’t really look like things will change in the future. I would have preferred to buy the game and get a real Puzzle Quest experience instead of having to deal with all the issues that come with free to play games.

These small issues, however annoying they may be, don’t manage to really damage the game. Marvel Puzzle Quest: Dark Reign is an engaging experience that sucks you in and only lets you go after hours. Leveling up characters can be a long process, sure, but this is hardly a problem when the game is so much fun!