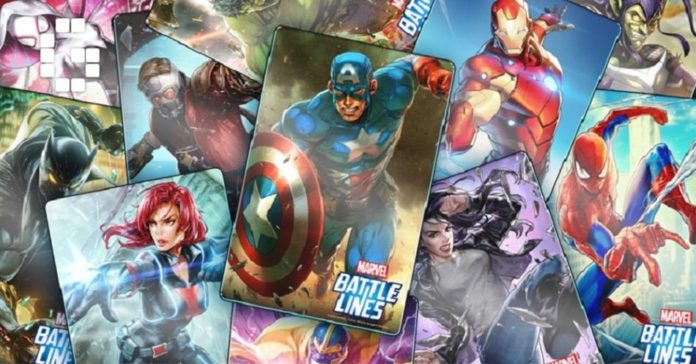 As you can imagine, with a CCG like this one that has over 200 cards and with so many options when it comes to mixing and matching leaders and the cards themselves, plus the random way of getting the said cards and leveling them up, you can have a ton of possible decks that really do well.

It’s impossible to have a single perfect deck recommended for Marvel Battle Lines as most players won’t have all the recommended cards. This is why creating tiers for the cards in the game is a better option and we’ll do that as well (takes a ton of time, though!).

But until we have everything set up, even a rudimentary guide is better than nothing, and this is what you’re getting here. A basic guide to the Marvel Battle Lines cards and how to use them to build a perfect deck in the game!

As I was saying in my general tips and tricks article, you should always try to mix and match your cards in such a way that you have all options covered. This means that you should have a solid mixture of generic cards (that cost nothing), some that cost 1 Cosmic Fragment, and just a couple that cost 2 or 3, plus an action card or two.

Of course, these basic rules are easier said than done when you have to actually go about selecting from the ton of cards that you have. My personal recommendation is to try and match the cards, then build a deck based on the team affiliations. This is the easiest way to build your decks early on until you understand the mechanics and how to match them for better results.

For example, let’s take this deck shared on Reddit by IremainMe: 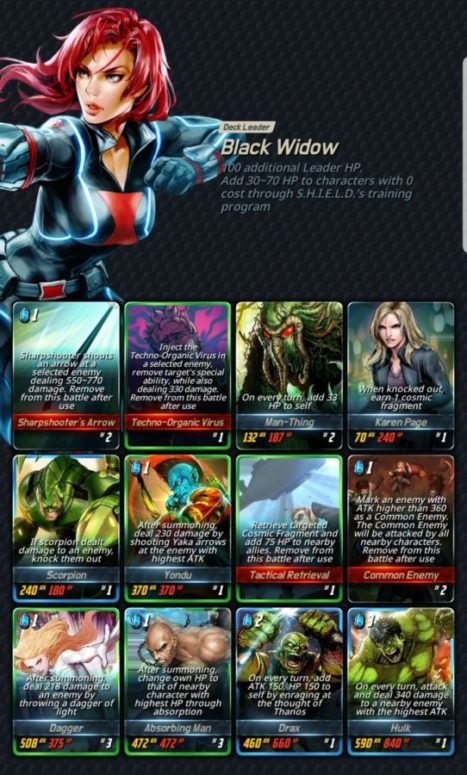 As you can see, this is a really well built deck, one created to fully take advantage of the leader’s strength. It has many low cost cards, making it extremely easy to play, and even more – pretty difficult for the cards to be destroyed once on the battle field.

But it’s not the advantage that the leader gives that is making this deck solid, but the great cards you can play for a low price. You have Yondu and Dagger with great play effects, you have the Hulk as your main weapon and a ton of Action Cards. I personally believe that the number of Action Cards is a bit high (I only recommend 2), but overall, the deck is extremely solid.

Here is another great deck, this time taking advantage of Thanos’ power and making it a truly amazing deck: 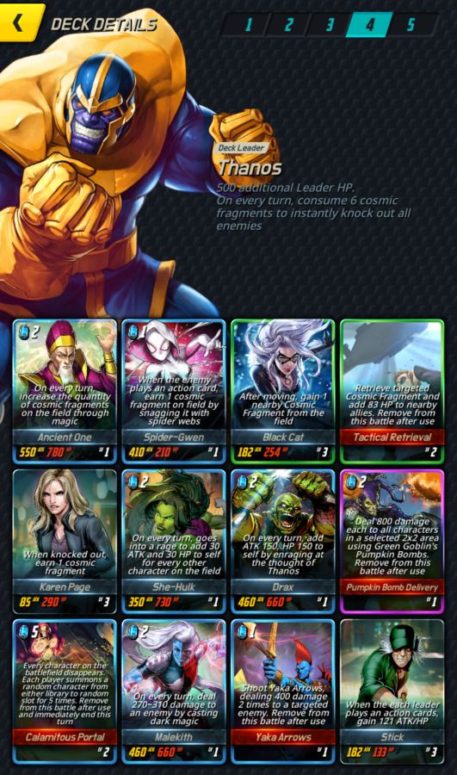 This deck was also posted on Reddit, this time by user yansyl001, and it’s absolutely amazing in my opinion. This is the ultimate deck, I would say and it focuses in a smart way on the leader’s power. Your opponent will have a really tough time keeping units on the battlefield, as you can easily understand by checking out the deck.

Choosing the best cards for your Marvel Battle Lines deck

Now, chances are that you won’t have all the cards required to replicate any of the decks above. And that is completely fine, since there are so many other combinations that work flawlessly – and that’s the reason why this game is so amazing.

However, there are some cards that I would consider better than the others, and I am listing them below. We’re starting with the generic cards that cost nothing:

– Maria Hill (one of my favorite cheap cards, since she increases the ATK to nearby allies)
– Stick (good counter for action cards, since he gains ATK/HP when an action card is played)
– Karen Page (not insanely useful in all situation, but her ability to reward you Cosmic Fragments when knocked out is solid)
– Colleen Wing (she deals damage when summoned, and that’s always good to have and also a rarity with no cost cards)
– Diamondback (for the same reasons as Colleen)
– Ikari (same reasons and it’s easy to farm as well)

Some generally good 1-cost cards (although their usability greatly depends on the deck you’re building):

– Ancient One (increases the cosmic fragment numbers – a good pair for Iron Man as leader)
– Drax (one of the most powerful cards in the game in my opinion)
– Malekith (constantly deals damage do enemies each turn)
– Bruce Banner (a bit difficult to play, as you want him killed ASAP – but once knocked out, it turns into Hulk with 700 ATK and 1,000 HP)
– Characters that deal damage on summon (some are better than others, but you play with what you got)

– Doctor Strange (he protects all allies from being attacked for 1 turn, perfect for creating ultimate attack chains against the leader)
– Thor, Ultron & Ghost Raider (they deal massive damage when summoned)
– Dormammu (great since he removes special abilities when summoned)

You shouldn’t have more than 1 of these cards in your deck as they are extremely powerful, but also very difficult to play. I haven’t had a chance to unlock such cards yet, but I can only imagine that they are deadly.

You also want to have around 2 action cards in the game. For them, I would only suggest bringing in cards that deal damage (the more, the better) and which don’t cost much to play. They are impressive and deadly, but their biggest problem is that they don’t cause leader damage like the actual cards on the battlefield do.

Hopefully, using the tips in this guide you can build a stronger Marvel Battle Lines deck. And even though the listing of the cards above doesn’t help much, probably seeing the two recommended decks paints a clearer picture and you can try to replicated them if all else fails.

Now, back to you: which are your favorite cards in Marvel Battle Lines? 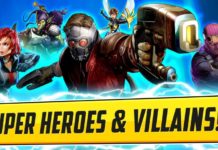