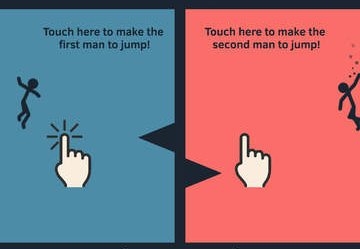 Make Them Fall is the new hit app from Ketchapp and it comes after the success of Make Them Jump seems to have faded away a little bit. In concept, the game is pretty similar but for some reason it seems a bit more difficult. Either way, we are here to share with you a complete set of Make Them Fall cheats and tips that will hopefully help you keep the guys falling and getting you a high score to write home about.

Before we check out Touch Tap Play’s Make Them Fall tips and tricks for all the game modes – including how to survive on impossible – you can also check out several minutes of Make Them Fall gameplay that I have recorded specifically for you:

Advertisement
Now let’s move on and let’s check out below the Make Them Fall cheats and tips!

2. Start on Normal difficulty
The best way to get used with the game, even for Make them Jump players, is to start on normal level. This game is, in my opinion, a bit more difficult than the first one, so you will need some time to adjust to the new gameplay and mechanics. Start on normal and climb up when you feel ready.

3. Bring in a friend (or more)
If you really want to cheat Make Them Fall, you must bring at least one more friend to play with you. The Normal mode played together with a friend is basically an endless scoring opportunity since each of you will control one side. Friends can become extremely helpful on the more difficult game modes and you can probably have up to three playing from all sides of the device. The more, the better your score and the more fun you’ll have!

4. Play on a larger device
If you have the option, playing on a larger device – especially if you bring in some friends – is the best way to go. The larger screen makes it easier for everybody to control their own area of the display without blocking the view of others.

5. Play alone with three fingers
It will be insanely difficult at first to play with three fingers (and eventually four) but as you train your brain and fingers, you will eventually manage to make it work. Start slowly with the higher levels of difficulty and keep practicing until you can play the game with three fingers (then switch up to four). It will probably bring you way less points than playing with friends would, but the satisfaction you’ll be getting will be bigger too.

So in the end, unless you want to really cheat the game and bring in extra hands, it’s all about practicing as much as possible and keeping up with the game’s speed. If you know other Make Them Fall tips and cheats, don’t hesitate to let us know!