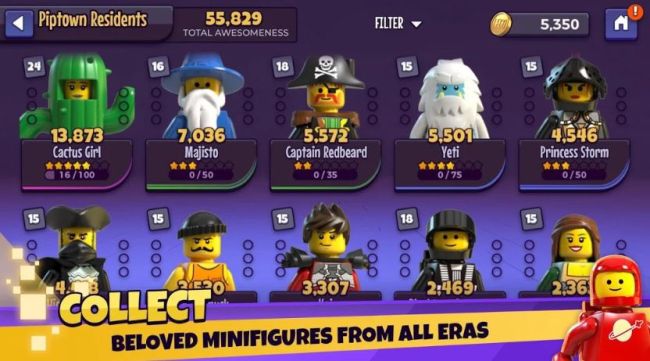 In today’s article we are going to check out all of the best heroes in LEGO Legacy: Heroes Unboxed and tell you our picks for which ones we consider to be the best in the game!

Since there are quite a lot of them, I’ll divide them into two categories: Builders and Explorers. And so if you want to see what are the best ones, you can also check them by their corresponding category!

This is a great unit as he can be obtained from completing Achievements and he has a very strong Ultimate, as well as a generally good skills kit which enables for buffs, debuffs and damage all together.

– Gear 2: Healing Feeling (Select a target hero who gains Payback for 1 turn and heals 10% of their MAX HP)

He is a great tank unit which helps allies and drains life from the enemies to help him sustain more. Basil is a great unit for the front line of battle especially if you don’t have a great Support unit just yet.

Tiles found from: Packs (pretty much depends on luck)

– Special: The Needs of the Many (Consumes 35% of his MAX HP and heals the other allies for 15% of his MAX HP. All active Castle heroes gain ATK Up for 1 turn)

– Gear 4: Steel Heart (Whenever Basil is defeated, heals all other heroes for 10% of their MAX HP and grants them DEF Up for 1 turn)

– Gear 6: Toot the Magic Dragon (Clears all buffs from all foes and heals all heroes for 30% of their MAX HP and grants them Payback for 1 turn and ATK Up for 1 turn)

She is a great unit as she is both tanky and has damage. I mean, what else could you ask for of a good and cheap unit to obtain? She will do great in any team at any stage, especially if you gear her up a little.

She belongs to: Builder, Attacker, Castle.

Tiles found from: Shop (her tiles can be bought when Shop is refreshed), Packs.

– Special: Cata-Brick! (Deals 50% DMG to all enemies and gains +10% bonus DMG for each stack of Courage on Storm, clears all stacks of Courage on her)

– Gear 4: One Tough Lady (Whenever Storm has Taunt and is attacked and takes damage, she has a 50% chance to gain 1 stack of Courage)

She is a great attacker (and yes, yet another princess) who avoids getting hit by enemies often due to the Stealth abilities, which make her a great asset to the team as she can stay alive for longer without much help. Oh, and she deals a lot of damage and is fairly easy to obtain!

– Gear 4: Surprise Attack (At the start of the turn, if Verda has Stealth, she heals 3% of her MAX HP)

He is a great hero which is available early on in the game, but if you work on him, he is going to be great for the late game as well (since he’s already got several upgrade from the earlier stages of the game).

– Gear 4: Spring Chicken (While he has any buffs on him, his SPD is increased by 5%)

She has a great basic attack which basically gives you a chance for 2 heroes attacking instead of 1, and Argenta has some pretty powerful skills which overall deal quite a lot of damage to enemies (single target and AoE).

– Special: Take No Prisoners (Deals 75% DMG to target foe and +5% bonus DMG for each debuff on the target. Deals 20% DMG to all other enemies)

– Gear 4: Loyalty to the Captain (At the start of combat, her skill is increased by 3% for each Pirate on the team)

This is a great supporter who has a great synergy with Argenta and many others, so it’s by all means a good figure to add to your team and enhance because not only he can make enemies useless (pretty much), but also has great damage.

– Basic: Gentleman Duelist (Deals 80% DMG to enemy, adds 10% damage bonus for each buff on the target)

– Special: Ship Shape (Deals 110% DMG to target and clears 1 debuff from himself)

– Gear 4: Bluecoat Admiral (10% chance to gain Debuff Immunity for 1 turn at the end of turn)

– Gear 6: Boarding Party (Admiral Nonsuch heals 80% of his MAX HP and inflicts Buff Immunity on all enemies for 2 turns)

These would be our picks for the best heroes in LEGO Legacy: Heroes Unboxed! There are just a lot of heroes and it’s not easy to decide on just a few, but these are all of my picks! What are some of your favorite heroes? Leave your picks down in the comments section below and don’t forget to take a look at our game guide where we share with you all of the tips and tricks we’ve gathered!