Home Sponsored Learn All About Era of Conquest 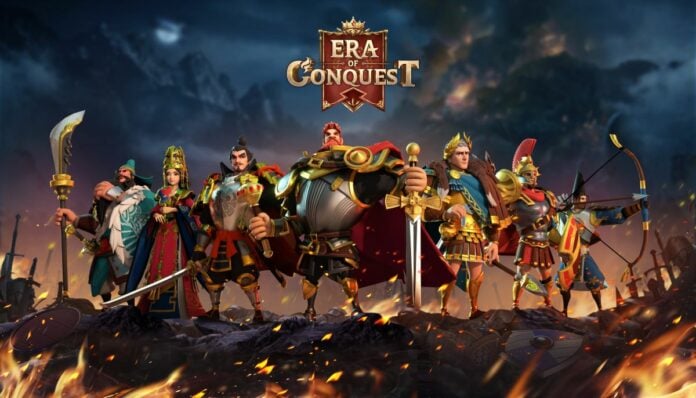 The Era of Conquest is upon us.

Don’t panic. We’re not talking about a state of endless global war. We’re talking about an ambitious 4X real-time strategy game called, you guessed it, Era of Conquest.

If you happen to live in mainland China, you’re probably already familiar with this highly acclaimed strategy game. After all, it reached the number 1 spot on the download charts and secured several Featured spots on the front page of the Chinese App Store.

But if, like us, you live outside mainland China and haven’t come across the game before, get ready.

Era of Conquest is coming to Steam, iOS, and Android later this year. And before it launches there’s going to be a closed beta test, starting in mid-July.

Here’s what you can expect.

Era of Conquest follows the story of a group of fallen lords trying to recapture their former glory and status. These lords belong to a variety of different world civilizations, including Britain, Germany, France, Rome, the Vikings, the Arabian people, and others.

That means you’ll get to pit medieval knights wielding pikes against Arabian warriors wielding curved swords, vikings against French soldiers, and countless other combinations besides. Plus, you can summon historical legends to help you out.

There’s a diverse selection of civilizations and heroes on offer, but your path to victory is always the same: crush it on the battlefield and then use the spoils of war to cement your power.

Your journey begins in the fog of the inner city, where you’ll be sheltered from attacks by other players. It ends when you reach

Era of Conquest is a 4X strategy game. For the uninitiated, that means it consists of exploration, expansion, exploitation, and extermination (yes, it should be called a 4E game, but 4X sounds cooler).

That neatly sums up what you’ll get up to when you play the game.

Let’s start with extermination. Each battle plays out in real-time and consists of up to 6,000 troops, making for some spectacular showdowns. Players from all around the world can take each other on in the same server, too.

Once a battle is over, you can return to your stronghold to lick your wounds or consolidate your position on the map. This means exploring your surroundings, building forces, creating command posts, and more.

Plus, you can grow your army by simply waiting for your numbers to replenish. Or you can open conscription boxes to speed the process up.

To obtain conscription boxes, all you need to do is defeat human opponents in PvP battles.

But it’s not all about destroying your fellow humans. There’s also an alliance system in Era of Conquest, allowing you to gain a strategic advantage through mutual protection and cooperation.

Why You Should Be Excited

There’s no shortage of mobile strategy games on the market, but Era of Conquest looks like a particularly outstanding example of the genre.

How? Well, first up there’s the fact that you can’t pay to get ahead. The only way to obtain resources and conscripts in Era of Conquest is through gameplay, ensuring that the experience is fair for everybody.

Then there’s the fact that Era of Conquest allows players from all around the globe to play on the same server. The game supports 19 different languages, so everyone can rub shoulders without anybody getting left behind.

The sheer scale of the game is another major draw. Era of Conquest takes place on a vast map, teeming with resources, challenges, and ways to play.

You’ll be able to play it for yourself soon enough.

Learn All About Era of Conquest