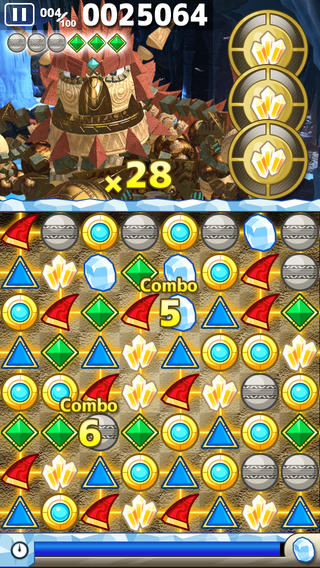 Knack is going to be one of the first titles to be released on the next generation Playstation console later this month.

As we have reported around a month ago, Knack was also going to be released on iOS devices before the release of the console version.

Knack’s Quest is based on the upcoming PS4 game. The game’s is not so complicated, as you will simply have to collect three or more of the same type of items. Collecting these items is going to make Knack grow. Making him grow beyond the limit will allow you to clear the stage.

To help gamers clear the most difficult stages, some special abilities are also included, available via Sunstone. Abilities like Thunder Chain and Blast will allow you to clear the stages quickly and will work best when under pressure.

The game isn’t definitely going to break new grounds in any way, but it will definitely be an enjoyable experience, especially if you’re going to get the full Playstation 4 game.

The Knack’s Quest release marks Sony’s desire to get more involved in the mobile market. The Japanese company thinks that iOS devices aren’t really going to hurt the traditional gaming market, as they can be used as a way to actually boost it. This makes quite a lot of sense, considering that pretty much everyone owns a smart device nowadays.

Knack is now available for download on the App Store. The game can be played on both iPhone and iPad.