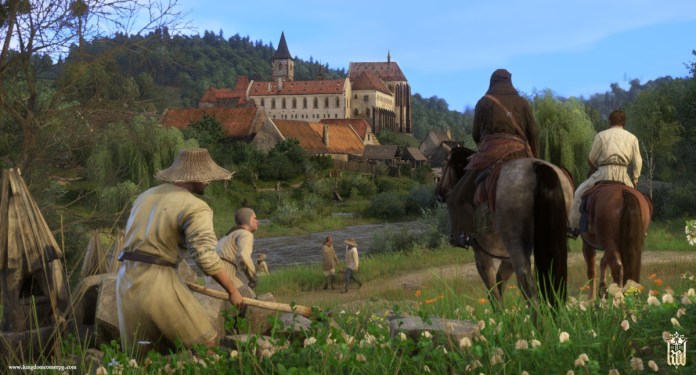 With the installation of the exclusive DLC “Treasures of the Past,” players in Kingdom Come: Deliverance have access to a set of five Ancient Maps. These maps reveal the locations of various treasures, which you sure want to get your hands on. On this page, we will show you the location of each ancient map, so all you have to do is follow the instructions you’ll find below.

What If You Don’t Have The DLC Installed?

Keep in mind that even if you don’t have the DLC (Treasures of the Past) installed, you can still find the treasures and pick up the loot. The only exceptions to this are the DLC-only items, such as the Augsburg plate chausses for example. The chests in Hardcore mode won’t include DLC items. Other than that, you can acquire whatever else is in the chests, even if you don’t actually have the maps.

Ride south from Neuhof down the river to the southeast until you arrive to the Charcoal Kiln Camp. Once you are there, ask about Ginger’s location. Follow the short trail at the rear of the campsite that leads up into the woods. It will lead you to a wrecked campground with a burned-down home and a chest. Continue moving East into the woods, eventually you will reach a corpse hanging from a tree. Keep moving East away from the corpse, you will eventually reach a mound. Digging up the grave with a shovel reveals a skeleton with an enormous skull along with the hidden treasure which includes the following:

If you have the DLC installed, there are two pieces of additional loot, which are:

Southwest corner, on the brink of the map. The spot lies a few meters south of a massive rock near the intersection of Sasau and Rattay, within a collapsed mine. Another location that you should dig up is in front of the collapsed cave entrance. It contains Saviour Schnapps and various herbs.

The Ancient treasure contains the following:

If you have the DLC installed, then you’ll get additional items:

Leave the windmill and walk east, you’ll eventually reach the road that meets at the pond.  Find the stone wall that stands exactly in the midst of two other walls of the same kind.  Continue heading eastward beyond the point where the wall begins to deteriorate, and you will eventually reach a huge tree where the stone wall crumbles. Use a spade on the dirt pile, and you’ll find the treasure along with a pair of skeletons. The treasure includes the following:

If you have the DLC installed, the chest will contain two additional items:

Cross the river from Rattay Mill and head west on the road until you reach the Woodcutter’s Camp. When the road splits, stay to the left and keep walking until you come to a clearing with a crumbling stone ruin and a wide archway. Look for the collapsing walls that slope downhill here amid the undergrowth, providing a ramp you may use to stroll along the tops of the walls. The treasure is hidden in a chest in this area of the center that is otherwise unreachable. The treasure includes:

If you have the DLC installed, the two additional pieces the chest contains are the following:

There aren’t many hints on this map. Bottom left: a river, a castle, and an icon. The castle and town in the corner are Skalitz because the hammer and chisel symbol alludes to the town’s silver mining. Take the route northwest till it reaches a river from the town of Skalitz’s North gate. Find the bridge between the two huge willow trees. Once you have crossed the river, turn north across a large basin. Continue heading north until the river becomes smaller and begins to wind; this area has a lot of shrubs and thicket to negotiate. Turn and go straight West through the dense shrubs and into the forest after you’ve traveled down the narrow, twisting portion of the river. A tiny pond eventually holds a deer hunting spot, and beyond it is a long-abandoned cabin. You may discover the treasure-containing box by going around to the other side of the cabin. However, this particular treasure is the only one that has a “Very Hard” lock, which prevents you from even attempting to open it until you increase your Lockpicking Skill to at least 10.

The treasure contains the following:

With the DLC installed, there are two additional items:

The above is a list of all of the riches and the places at which they may be found, whether or not you have the Ancient Maps. If you are having fun with Kingdom Come: Deliverance, you may also be interested in the following articles on our website: