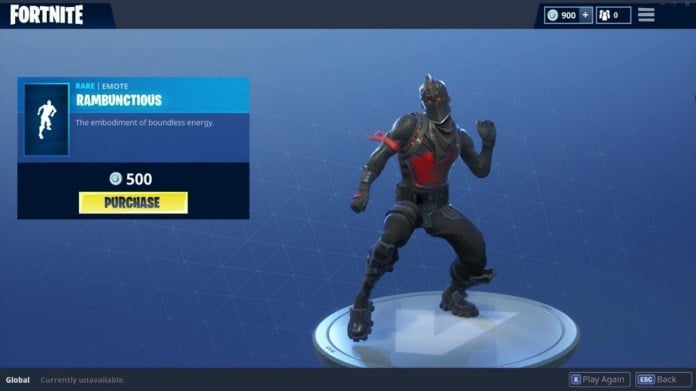 Fortnite’s Item Shop has seen some interesting issues lately, with a couple of iconic and controversial emotes returning then quickly disappearing. One of these was the Will Smith inspired dance ‘Rambunctious’, which some players may remember seeing in The Fresh Prince of Bel-Air. This rare emote is coveted by many players but is the Rambunctious emote in Fortnite coming back? – Answered.

The Rambunctious Emote in Fortnite

The rare emote named ‘Rambunctious’ had previously appeared in the Item Shop 6 times, but only during the summer of 2018 between June and September. There was some controversy surrounding it as it was one of the Fortnite emotes facing lawsuits from those who inspired it, and this is possibly why it never appeared again for 1,500 days!

For some unknown reason the emote suddenly appeared in the Item Shop on December 6th 2022, but disappeared after only one hour. Strangely enough, this happened just after another emote which faced legal action ‘Tidy’ inspired by Snoop Dog, also reappeared for a very short time after being away for 1455 days.

Epic Games took to Twitter to explain they were having some issues with the Daily Item Shop cosmetics, and subsequently the Daily tab in the shop disappeared entirely.

As both Tidy and Rambunctious were both removed so quickly, it is highly unlikely that either will return any time soon. This is obviously bad news for anyone wanting to buy ‘Rambunctious’, the rarest emote in Fortnite.

If we hear any news of this ultra rare emote returning, we will be the first to let you know! Meanwhile, check out which are the rarest skins in Fortnite!

Is Rambunctious Emote in Fortnite Coming back? Answered