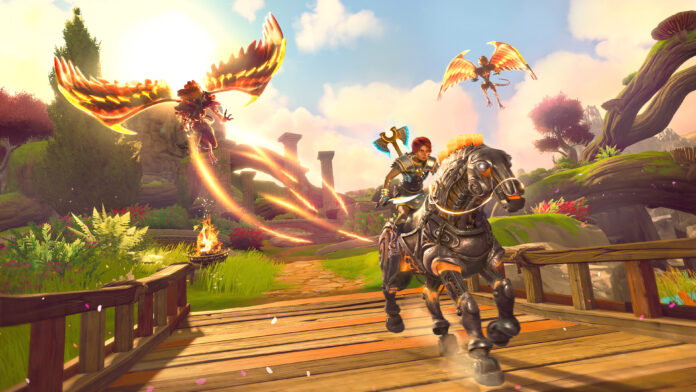 Immortals Fenyx Rising may not be a full-fledged role-playing game like other open-world games, but it still comes with mechanics that let the player power Fenyx up and unlock new skills.

The game does feel a good number of different skills and Godly Powers, but some of them are way more useful than others, especially if you’re just starting your adventure in the Golden Isle. In this guide, we will take a look at some of the skills that will make combat more varied, more fun and, most of all, easier at any difficulty. Coins of Charon are a little limited in the beginning of the game, so you definitely need to know how to spend them effectively.

One of the very first skills you should purchase is the Sword Launcher skill. This skill allows Fenyx to launch small and medium-sized enemies into the air by holding the sword attack button during a combo. Launching enemies in the air is a great way to deal additional damage to enemies without getting interrupted by enemies on the ground. A great companion skill to Sword Launcher is the Axe Cleave skill, a powerful downward swing that deals damage to surrounding enemies as well.

Once you have learned both the Sword Launcher and the Axe Cleave skills, you can get the Sword Combo and Axe Combo skills. These two skills extend the total number of attacks in a combo, allowing you to dish out additional damage before unleashing the finisher. If you like fighting in the air a lot, the Sword Air Combo and Axe Air Combo skills are very good choices as well.

Once you have learned these skills, you can learn others depending on your playstyle. If you are a defensive player that loves parrying attacks, you should definitely learn the Sword Counter Attack and Axe Counter Attack next, as they will make your parries even more effective.

Goldy Powers are unique skills that allow Fenyx to take advantage of the power of the gods. They all are quite useful in their own right, but a few of them are more useful at the beginning of the quest. Ares’ Wrath is one of the powers you should learn as soon as possible, as it lets you launch enemies in the air and deal tons of damage. Used in conjunction with the Sword Launcher skill, you can juggle enemies in the air for much longer.

Haphaistos’ Hammer is another great Godly Power that you should learn as soon as possible, as it deals damage to enemies inside a wide radius and can also be used in the air to end any air combo and get quickly back on the ground. If you are quick enough, you can relaunch the enemy in the air, creating a loop from which they cannot escape.

Phospor is a great help at all times, even in his basic form, but he becomes even more helpful once you learn Phosphor’s Shockwave. This Godly Power makes it so that every one of Phosphor’s attacks unleashes a shockwave that damages surrounding enemies. A great way to win encounters with multiple enemies at the same time.

The final Godly Power you should get as soon as possible is Herakles’ Leap. An upgrade to the basic Herakles’ Strength power, it allows you to leap toward targeted enemies, which is a great way to deal with those pesky flying enemies without having to rely on the bow alone.