Hungry Dragon has just been released worldwide by Ubisoft, and the game builds on the mechanics and popularity of Hungry Shark World, taking everything to a whole new level though.

And we’re here to help you by sharing some Hungry Dragon cheats and tips in our complete strategy guide. You’ll learn everything about scoring points, leveling up and unlocking all dragons – everything you’d expect to find in a complete guide.

So let’s not waste a single second and instead let’s check out some Hungry Dragon tips and tricks below! 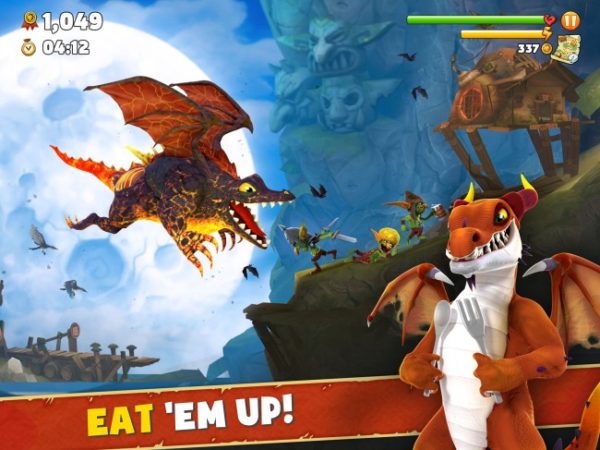 Eat (almost) everything
A dragon is always hungry and fortunately the game’s world has ton of things on the menu. Make sure you eat them all and remember that in most cases bigger is better.

However, you can’t really go eat the biggest things in Hungry Dragon straight from the beginning, as you will need a larger lizard for the larger prey. Usually, the golden rule of thumb here is that the larger your target is, the larger you have to be in order to be able to eat it.

And to make your hunger even more difficult, there are various obstacles and things you should stay away from: starting with floating mines and all the way to wizards and soldiers, there are tons of things you shouldn’t try to eat. Other dragons also roam the lands and even though you can eat those in most occasions, you should do it with caution.

So, basically, it should all resume to: eat as much as possible in order to keep on going and stay away from obstacles and enemies you can’t consume since they’ll drain your health bar faster!

Combos
As you play the game and eat various types of creatures and goodies in the game, you start racking up on combo points. Increasing your combo meter results in you scoring more points for everything that gets into your dragon’s belly, so you should try to keep that meter as high as possible.

Remember that the combo meter resets if you hit an obstacle (or an arrow hits you), so stay away from trouble when you get those numbers really high.

Prepare for the fire rush
Fire rush builds slowly as you play the game. You can check it out at the bottom of the screen: it’s that bar that fills up way too slow.

But once it’s activated, you are ready to do some serious damage: your dragon starts spitting fire and burns everything around. This is why you should always be in a highly populated area before your fire rush begins, preferably somewhere with many large targets.

You can also keep an eye out for a huge red chili: when you eat that, the fire rush bar fills instantly and you can start wreaking havoc right away! 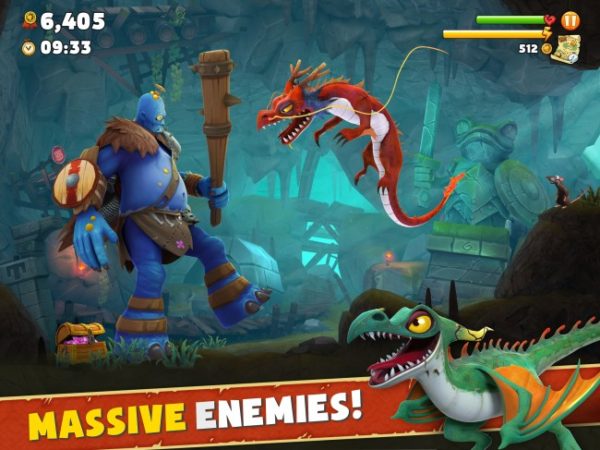 Eating Special Creatures
Randomly during play time, you will see various special-looking creatures. And whenever you do, make sure you do everything you can to eat that as it always has some sort of goodies for you.

Pets for your Dragon
Eventually, you’ll start getting some eggs during your terror-wreaking play sessions and those will unlock to reward you with Pets. These are really helpful little buggers to have around!

Pets are there to basically increase some of your stats or give you various boosts and they come in all sorts of shapes and sizes. You can only equip a limited number of pets (the larger your dragon, the more pets you can equip), so you should always bring in the one that gives you the biggest advantage in the game.

I personally prefer those that increase my speed since they make my dragon easier to control and easier to feed, but also the ones that increase my hunger meter because I simply play longer. But you should check all possible combos and see what works best for you!

Unlock costumes
Costumes are similar to pets, meaning that they give you various bonuses which can be paired up with the ones offered by Pets for even better boosts to your stats.

Costumes, however, require money to be unlocked – so don’t rush to spend all your coins there, because you will need them to unlock the larger dragons. But once you have some costumes, make sure you equip them for the boost and extra style points (the latter don’t count in-game, though).

Bigger is Better
Just like in real life, bigger is better when it comes to dragons. Larger dragons can equip more pets, can eat larger creatures and are overall better than the smaller ones.

In order to unlock them, you have to keep playing and maximize your point gains with the previous dragon, max them up and then unlock a new lizard. So this is basically how you will unlock all dragons in the game. You can also take a shortcut and spend Gems to unlock them early if you really want to.

Complete missions, gather letters
An extremely simple way to get a ton of coins easily is to complete the missions that the game throws at you. You get three at a time and after completing them, you have to wait a while before new missions pop up. So focus on getting those jobs done ASAP to increase your treasures.

There is also a daily word that you can collect letters for – and once completed, it will reward you nicely as well. You will find a minimap while playing which should always be consulted, as it shows you the locations of the letters you need to complete the word.

The minimap itself is not as easy to use as one would hope – I always end up in completely different areas after checking it out, but it’s better than aimlessly roaming around searching for letters. Constantly check it out and you’ll get those letters in no time!

This would be all that we have for you in terms of Hungry Dragon tips and tricks right now. If you have more to share, don’t hesitate to do so by commenting below. 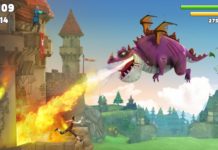