Home Game Guides How to Use Reposition in Fire Emblem Heroes 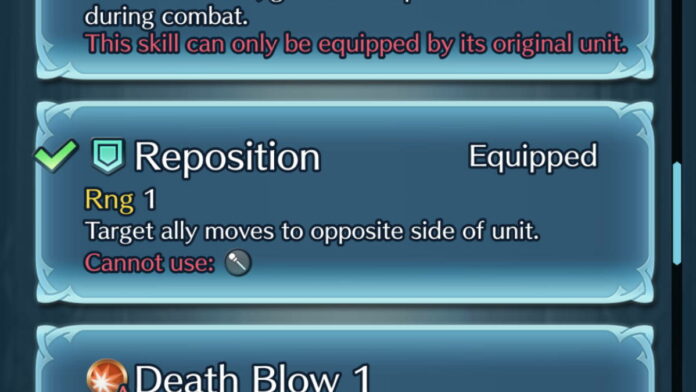 How to Use Reposition in Fire Emblem Heroes

As mentioned, the Reposition skill is considered an Assist skill, denoted by the green shield icon. Only certain units have access to this skill inherently, and if you want another unit to have it, you’ll need to inherit it from someone else. Most units who learn it inherently come with it already learned, but you may have to spend SP to learn it. The unit must equip Reposition in order to use it during battle.

Reposition moves an ally unit to the opposite side of the user. The direction the unit moves in is determined by which direction the user comes in from. For example, if a unit uses Reposition from the right side of the ally, the ally will be moved to the user’s right side. Using Reposition is as easy as dragging your unit over the ally you want to move, and you should see the green shield icon pop up to let you know that your Assist skill will be used.

Reposition is a handy skill that can be used offensively or defensively, depending on the situation. If you accidentally sent one of your units in too far, you can use Reposition to get them out of a potentially bad situation. Or, if your ally is just out of reach from attacking an enemy, you can move them closer with Reposition.

That’s how you use Reposition in Fire Emblem Heroes. If you have any questions about any other skills, let us know in the comments below!

How to Use Reposition in Fire Emblem Heroes