Home Game Guides How to Use Frederica in Triangle Strategy 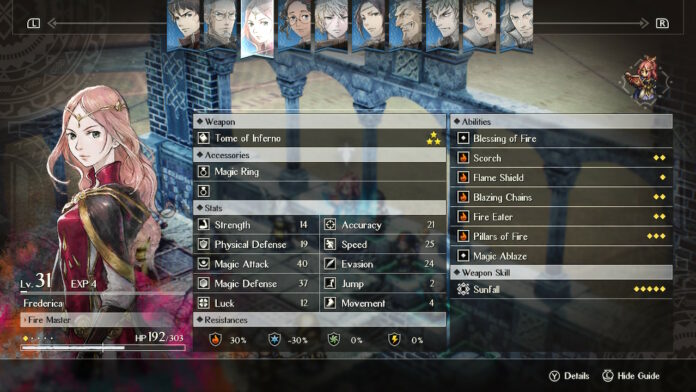 Triangle Strategy features a big character roster that sports all sorts of unique units that come with specific abilities that determine how they fight and what they are good at doing. While this may feel a little limiting, compared to other similar games, this system makes it so that every unit is more than viable, giving players plenty of options to make the game continue to feel fresh and exciting even after tens of hours.

Among the characters that will join Serenoa right from the start is Frederica. Here’s everything you need to know to use her properly.

Frederica Aesfrost joins Serenoa’s army in Chapter 1, so she is available for pretty much the entirety of the game alongside a few other central characters. While she is generally a very frail fighter that goes down in a few hits, she can decimate the enemy using her long-range fire spells, which also allow her to control the battlefield somewhat, and potentially limit how enemy units can move.

Frederica learns a total of seven abilities by leveling up and promoting to her Veteran Class, Fire Caster, and her Elite Class, Fire Master. By enhancing her Tome of Fire weapon and unlocking the Tome of Inferno, it is also possible to unlock an additional and extremely powerful ability.

How to Use Frederica

As already mentioned, Frederica is quite frail, but this doesn’t mean that she cannot be a powerful unit in her own right, as she makes up for her low defense and HP with her damage output. Being a Pyromancer, Frederica wields powerful Fire elemental magic that can not only hit multiple enemies and set specific tiles on fire (Scorch and Pillars of Fire) but that can also make units absorb Fire attacks (Fire Eater).

Her final class ability, Magic Ablaze, also allows her to take advantage of burning tiles by increasing her magic attack whenever she is standing on one. If you do this, however, make sure she is always at full health, as any unit receives damage from burning tiles, and Frederica is no exception, even though Blessing of Fire grants her increased Fire resistance. Her unique Weapon Skill, Sunfall, is also extremely powerful, and it can be made to go off instantly without charging by using Benedict’s Now…! skill or the In Tandem Quietus.

With all these peculiarities, Frederica is a unit you will never want on the frontlines by herself, but with the proper support, she can weaken multiple enemies enough so as to let other sturdier units move in for the finish without having to risk too much.

How to Use Frederica in Triangle Strategy