Home Game Guides How to Use a Recon Scanner in Fortnite 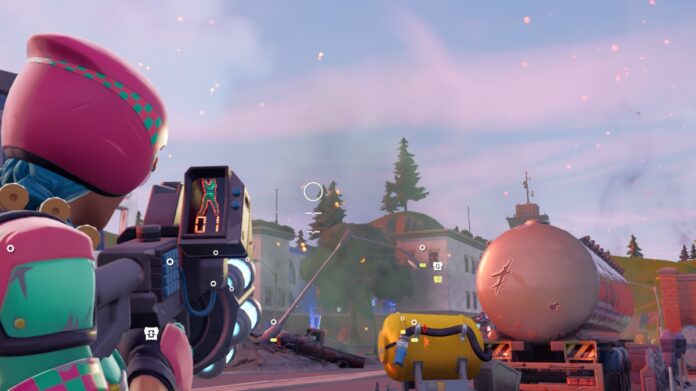 The Recon Scanner is an item used to seek out and mark the location of chests and enemy players. It was first introduced in Fortnite Chapter 2 Season 7, the season of alien invasions and flying saucers! The scanner has been temporarily reintroduced in Chapter 3 Season 2for Rail Gun Recon Week where players can use it to gain extra XP. Find out more below.

How to Use a Recon Scanner

The Recon Scanner is classed as a miscellaneous item as it does not deal any significant damage to players. Instead it is used as a reconnaissance device to locate chests and opponents (including IO guards and animals). It holds 2 rounds of Scanner Ammo in the chamber, and has a fire rate of 3. The ammo for this item is not available to pick up from ammo boxes, instead it recharges within the Recon Scanner itself, taking 15 seconds to recharge. When fired, the Recon Scanner shows how many enemies are in range:

Related: How to Ignite Structures in Fortnite

Combing this item with a Rail Gun can be pretty deadly as you can track players and shoot them through structures. The best way to use the Recon Scanner is to fire a couple of rounds over structures nearby to reveal nearby opponents, or shoot one directly into the building where you are to see who else is there.

Enemy players, IO guards, and animals will all be highlighted in red with a red icon above their heads. Once they can be seen you can either seek them out, fire projectiles or a Rail Gun at them, or hide until they have gone

Do not forget- the Recon Scanner is also useful for pinpointing where chests are located. Fire a round over a building and see if it worth investigating. Chests and ammo boxes will be highlighted in yellow with a small icon above them.

Find a Recon Scanner where you would normally find loot, grab one and get scanning! Let us know in the comments below if you’d like to see the Recon Scanner stay in Fortnite permanently.

How to Use a Recon Scanner in Fortnite