Home Game Guides How to Ignite Structures in Fortnite 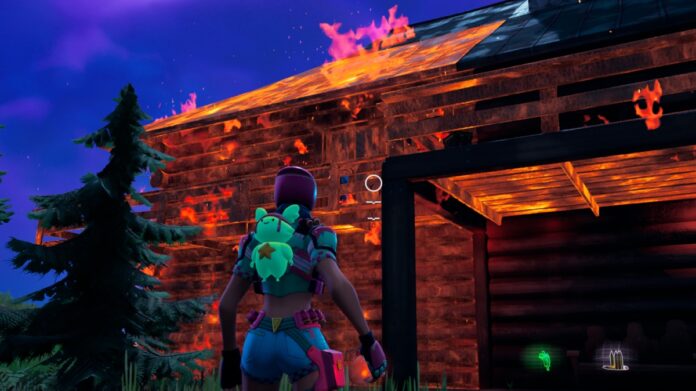 Fire damage in Fortnite was first introduced in Chapter 2 Season 3, creating another way to damage structures and players. Since then, there have been many items and weapons added that can set fire to buildings, trees, the ground, and opponents. Occasionally a quest or challenge is given to players to ignite structures or damage opponents using whatever fire they can find. This guide will show you many ways you can ignite structures in Fortnite.

One of the easiest ways to ignite a structure in Fortnite is to use Firefly Jars. Players can find these as floor loot, or by capturing them in woodland areas. They can be recognised by their orange glow and faint sound.

A Firefly Jar deals 40 damage to players with a direct hit, and the flames spread to nearby trees and wooden structures. They can also be thrown directly at a wooden structure where they will spread rapidly.

Another way to ignite a structure is to shoot at a Gas Can or Gas Pump until it explodes. This ignites and structures around it, and damages players- including whoever made it explode!

A slightly more unconventional way of igniting a structure is to drive a vehicle near a building and shoot at it until it explodes. The fire will spread and damage surrounding wooden objects.

During Chapter 3 Season 2, Repair Torches were added and these can be used to ignite wooden structures directly. Players should be careful though as once the fire catches, it spreads quickly!

The Flare Gun is also a great way to ignite structures but, during Chapter 3 Season 2, it is only available in Creative Mode and in Unvaulted game modes. Just shoot a flare at structures and watch as they burn bright!

We hope that has helped you complete any fiery challenges! Good luck.