Home Game Guides How To Throw a Lightsaber in Fortnite – Guide 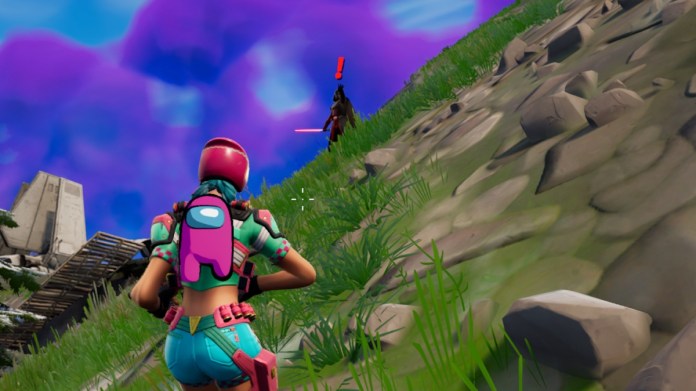 Star Wars comes to Fortnite occasionally and brings themed items such as E-11 Blasters and the iconic lightsaber to use. The lightsabers are mythic melee weapons that deal between 40 – 150 damage to players and structures. One of the more coveted lightsabers belongs to Darth Vader, and has one difference- it can be thrown! Find out below how to throw a lightsaber in Fortnite – guide.

How to Find and Use the Darth Vader Lightsaber

The only lightsaber in Fortnite that can be thrown is the red lightsaber belonging to Darth Vader. To obtain this lightsaber you should defeat Darth Vader at the Imperial Docking Bay.

While on the Battle Bus, players will hear and see Darth Vader’s ship fly by. When it has landed, a blue marker briefly appear to show its location. Landing nearby is the best option, that way you can load up and ensure you have full shields before attempting to defeat Vader and his Stormtroopers.

Darth Vader will attack on sight, as will his stormtroopers, so be ready and try to get the first shots in before he attacks. Vader will use the Force to jump towards you, or pull you towards him which is a good moment to use a short range weapon.

Related: How to Get Pulse Rifle in Fortnite

Once he is defeated he will drop his saber for you to pick up and keep in your inventory. You can use the lightsaber like any other, swing to hit opponents or structures, and block shots or perform a dodge roll. Each hit does different damage: 45, 45, 25, 25, 25, then an overhead slam for 150.

Darth Vader’s lightsaber can also be thrown by pressing the fire button while blocking. This creates a slow projectile with the lightsaber which can damage both structures and players. It deal 100 damage when thrown, so it could break a weak wall for 50 and then deal 50 damage to the player inside the structure if hit.

That is all you need to know about throwing a lightsaber in Fortnite. Next up, why not check out how to complete Skywalker Week quests? Good luck.

How To Throw a Lightsaber in Fortnite – Guide