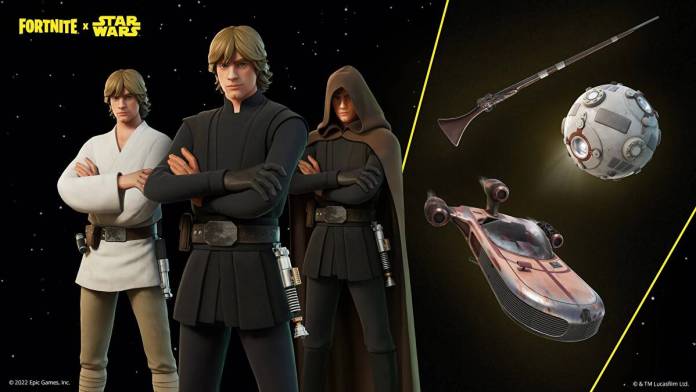 Star Wars has returned to Fortnite for one week only this month. Players can grab a lightsaber and fight Darth Vader, or find a blaster or pulse rifle and complete bonus quests. Find out more below on how to complete Skywalker Week quests in Fortnite.

For one week only a series of quests from a galaxy far, far away are available to complete for some bonus XP. The Skywalker Week Quests involve picking up and using the Star Wars themed weaponry and meeting or fighting characters.

Darth Vader is back with his Stormtroopers, as are the exclusive chests full of E-11 blasters and healing items! Check out the quests below to see what is available and how much XP you could earn.

Each challenge rewards players with 20K XP and completing the quests is fun and challenging without being impossible.

Related: How to Fall 7 Stories as a Chrome Blob in Fortnite

To defeat Darth Vader, just watch out for where his ship is landing as the Battle Bus goes over the map at the start of the match. As long as you are nearby when he is defeated you will be rewarded with the challenge completion.

The Star Wars chests are found at the stormtrooper outposts in 4 locations, plus where ever the Darth Vader ship lands. These are north west of Chrome Crossroads, southwest of Tilted Towers, and near Greasy Grove. This is also where you will find a Stormtrooper to accept a bounty.

That’s all we have for this bonus week of Skywalker quests and content! Next up, check out what you have to do to unlock the Chrome Punk skin for free. Good luck.

How to Complete Skywalker Week Quests in Fortnite