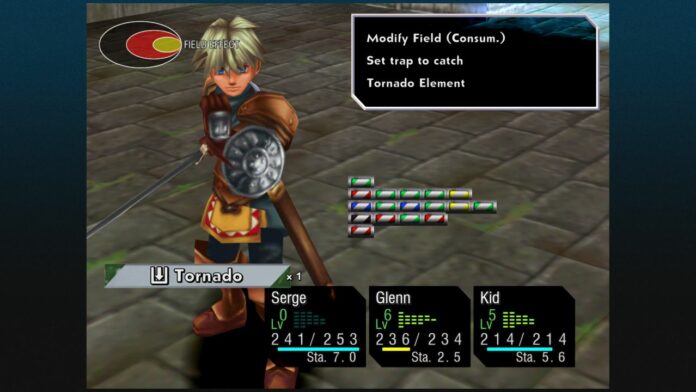 Chrono Cross: The Radical Dreamers Edition features plenty of unique gameplay mechanics that set the game apart not only from its predecessor but from most Japanese role-playing games on the market.

Among these unique gameplay mechanics is the magic system which allows players to set up multiple spells called Elements on each character’s Element Grid to be used in battle.

While most Elements in Chrono Cross: The Radical Dreamers Edition are obtained by either purchasing them, as enemy drops, or inside treasure chests, players can also steal elements from enemies in battle. Here’s how to do so.

How to Steal Elements in Chrono Cross: The Radical Dreamers Edition

Chrono Cross: The Radical Dreamers Edition features some special consumable Elements called Traps that can be used in battle to steal Elements.

Trap Elements, which are indicated in the menus with a down arrow icon, are used like every regular Element, only that they will activate, and allow you to steal Elements, only if a specific Element is used.

To make an example, if you use the Carnivore Trap Element, it will only activate if the enemy uses the Carnivore Element. Once used, the Trap Element is lost forever, so make sure to use them only if you are certain the enemy uses the Element you want to steal. Additionally, the stolen Element will not be activated, so using Traps is an excellent way of preventing enemies from using powerful spells as well

Most common Trap Elements can be purchased from the merchant in Marbule in both Home World and Another World. Special Trap Elements that let you obtain Summons are dropped or can be stolen from specific enemies

How to Steal Elements in Chrono Cross: The Radical Dreamers Edition