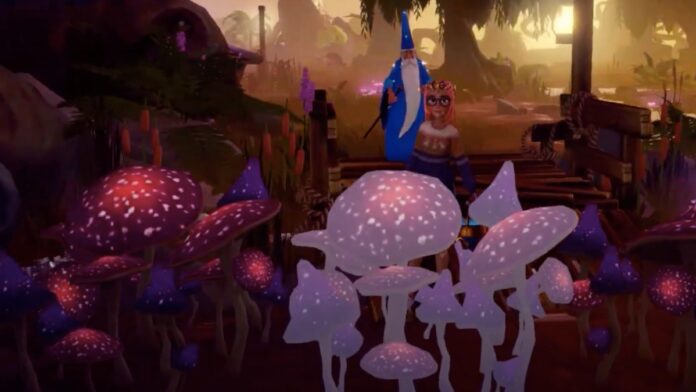 Have you ever wanted to be in the same universe as your favorite Disney characters? Maybe you’ve always dreamed it, but you aren’t enough into RPG games to play something like Kingdom Hearts. In Disney Dreamlight Valley, you can have a new kind of personal interaction with your favorite Disney icons.

This game combines life simulator elements with Disney themes. One of the mechanics involves puzzle elements that block you from certain areas until you have the means to remove them. In this case, we’ll focus on how to approach mushrooms. This is how to remove purple mushrooms in Disney Dreamlight Valley.

What You Need To Remove Mushrooms

The first thing you are going to need is your trusty watering can, which is one of the tools granted to you at the beginning of the game. The watering can on its own cannot remove the mushrooms until you upgrade it. To do this, you have to find Merlin and perform his quests, specifically the one called A New Enchantment.

Merlin is from the movie Sword in the Stone, which is a Disney adaptation of the story of King Arthur. In the film, Merlin acts as a teacher guide to the young boy who will eventually become King and he has a similar role towards the player here. Merlin will put a spell on your watering can for the duration of the quest that will let you destroy the mushrooms, specifically the Glade of Trust ones that you have to get rid of to access that area. You’ll find the game has other blocks like those throughout its maps.

How To Make The Ability Permanent

Unfortunately, you can’t keep the ability. To make it permanent, you have to keep completing Merlin’s quests and increase your Friendship Bond with him. Once you get to the level 8 Friendship Bond, you’ll unlock a new quest known as A Dark Experiment. Once you complete it, you’ll have your Watering Can permanently be enchanted to destroy mushrooms.

If you’re a Disney lover and always wondered what it would be like to interact with the worlds of your favorite characters, definitely check out Disney Dreamlight Valley today!

How to Remove Purple Mushrooms in Disney Dreamlight Valley