Home Game Guides How to Recruit Jens in Triangle Strategy 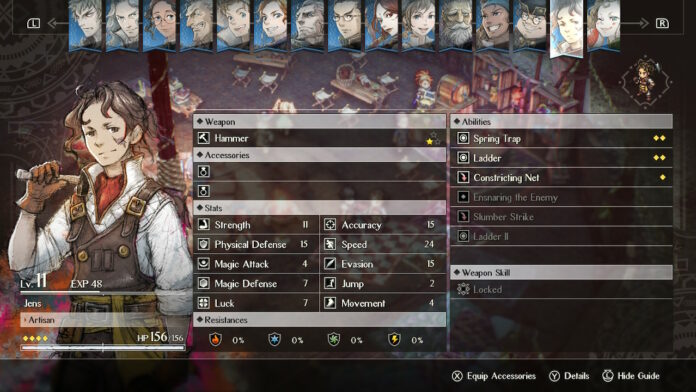 Triangle Strategy features a big character roster, but only a few of these characters will join Serenoa automatically as part of the story. Many of these characters are entirely optional, and you will have to fulfill certain conditions to get them to join House Wolffort’s army.

Among these optional characters is Jens. Here’s how to recruit him.

How to Recruit Jens in Triangle Strategy

Jens Macher is a character that Serenoa meets relatively early in Triangle Strategy, as he is the blacksmith who offers his services in the Encampment. He can also join the lord of House Wolffort in combat, but only once certain conditions have been met.

Jens will join Serenoa’s army only after Serenoa’s convictions have reached a certain value. Once Morality hits 450, you will unlock Jen’s Character Story, and at the end of it, he will join the army. You can access Character Stories on the world map once a special icon appears on the lower right part of the screen. When this happens, press the + button to access the currently available Character Stories.

Jens is a very interesting character in Triangle Strategy, capable of crafting items in battle such as ladders and traps that allow you to better control the battlefield. As such, Jens works great with units that can use ranged attacks, allowing them to better position themselves to defeat all of the strongest enemies in the game.

How to Recruit Jens in Triangle Strategy