The newly released Onmyoji game by NetEase has a pretty steep learning curve and reading an Onmyoji guide that takes you through the basics is more than welcome. This game is extremely complex and beautiful, so don’t let the difficulty it starts with lure you away from it. It’s worth giving it a try as it’s that type of game you can fall in love with instantly.

In today’s Onmyoji guide we are going to share a bunch of tips, tricks and strategies that will help you get the most out of the game and understand its basic mechanics. This is mostly aimed at beginners to mid-game players, but even the more experienced ones should read as they might find some useful stuff here.

I am personally happy to see that Netease is still able to deliver amazing games and doesn’t focus on their insanely popular Rules of Survival. So let’s not waste any time and let’s check out below some Onmyoji cheats and tips in our complete guide.

Onmyodo vs Shikigami
There are two types of characters you can have and their names are above. Basically, the Onmyodo are the main characters / leaders and there’s just a few of them in the game, while the Shikigami are the heroes that you unlock in the game and there’s a lot of them, of various rarities.

The Shikigami are the base of your team since you can bring three of them in battle (although some missions allow you to bring more) and they should be your main focus to level up and upgrade, once you unlock solid ones for your team.

Feeding Shikigami
You can also upgrade Shikigami by “feeding” other Shikigami to your favorite ones. The rarer ones are obviously better and you should keep them at all times. The Normal heroes, however, are those that can be safely used as leveling up material since they will become obsolete pretty fast in the game.

However, if you’re just starting to play the game, I recommend keeping all your heroes until you really understand the basics and you’re sure that you won’t need one that you’re about to sacrifice. Plus, you should only feed Shikigami to other characters after completing their quests (more about this below).

If you want to make sure that you don’t accidentally feed a hero you’d want to keep, you can always hit the small lock button near their name int he Shikiami menu. 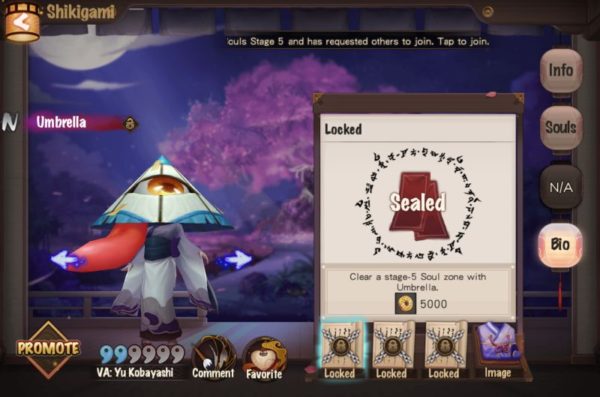 Each hero has a set of three quests that you can and should complete in order to get some really amazing rewards. These are relatively difficult to complete and take a lot of time, but you should definitely do them.

You can check out the quests for each Hero in the game by going to their Bio section in the Details menu.

The Souls in the game
The Souls are artifacts that enhance your heroes even more and they’re extremely complex. We’ll need a dedicated guide to this feature alone, but until we get that, we’ll cover it a bit here as well.

The Souls in the Onmyoji game offer synergy bonuses: if you equip 2 or more, you get extra bonuses in terms to attack, skills and so on. This is why you should always aim to equip your Shikigami with souls that offer synergy bonuses. It’s good to start planning this early on, even though you can remove any equipped soul and re-equip it at a later date when you have more options.

My recommendation is to equip Souls based on the strengths of your heroes. For example, the attackers that deal a lot of damage should receive attack enhancing Souls, while support ones should get souls that increase their spell or skill power, defense or HP. 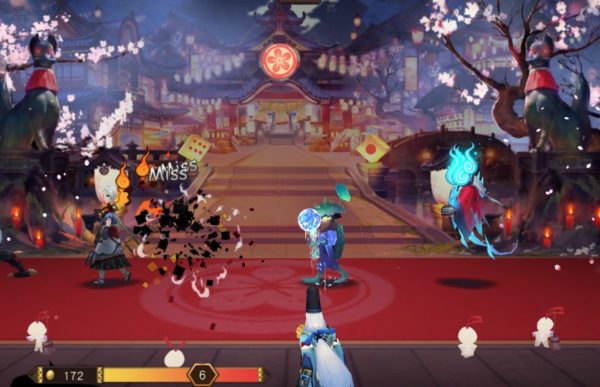 This is an insanely useful feature that you should join each time you have some tickets available, as you will get the chance to win a ton of shards for new heroes. You can also bring in a friend to help and this increases your chances of hitting the ones passing by, so it’s definitely something you should always do.

Before starting, you can select one of three Shikigami to be your favorite one and your chances of hitting them increase and/or you get more shards when hitting them. You also get some flying characters above every now and then: you should always aim to hit them as they deliver all sorts of bonuses.

You can select how many Beans you throw at the passing Shikigami in the lower left corner (the more you use, the better your chances of hitting) and you can see the time left on the top of the screen. Good luck here!

Join a Guild and add friends
As soon as you have the chance to do so, you should join a guild. Then, make sure that you are in a very active guild with many people as this increases your chances at getting a lot of goodies. So if you don’t get into a really good guild from the beginning, keep looking: usually, it’s the guilds with some solid requirements that will also help you get top rewards.

Once in a guild you can complete missions, earn shards to spend in the Mall, make more friends and donate/receive shards for your favorite heroes. For this reason, it’s a good idea to join a guild with players active during your play time since you will need to team up on a few occasions to reap on the benefits

You should also add friends – from the guild or otherwise and the more you have, the better. Friends are also extremely helpful in the game so having active, solid ones is a must.

Setting up a Realm and doing raids
These are also two things that you should focus on as soon as you unlock the feature. There are tons of rewards to be won here and one great way to level up your heroes, including the ones you don’t normally use.

Building a perfect team
A bit of luck is required to get the best characters in the game (or spending money until you do), but you can still build a solid team in Onmyoji for mobile if you play constantly and you play smart.

Make sure that you complete all quests and get all the rewards available in the game, then get the most out of the Shard events or missions. Slowly but steadily, you will build quite a few characters and you’ll be able to build a perfect team. Don’t forget to level them up once you get them and assign souls based on their role.

The best Heroes in my opinion are those that deal area damage since they can affect multiple enemies. You can even max out their skills by casting an extra damage spell before they attack, then hit the entire pack of enemies with an AoE hero.

Even better, the ones that get a passive skill to heal are even more useful, but in the end it’s up for you to do the sorting and build the best team based on what you have. In most cases, it’s the rarer heroes that are the most powerful in the game.

Unlocking more main characters (Onmyodo)
You start with Abe no Seimei as your main character, but as you progress through the story, you can unlock more. They will automatically level up and receive skill points as you complete the missions in the game, so there’s not really too much you can do here.

If you want to change the main character you’re using, you should tap them on the screen and select the one you prefer playing with. We’ll have a complete guide on main characters coming soon, so keep an eye on our website until then.

The game is, as you probably know already, insanely complex. This guide would be a great starting point for those looking for some Onmyoji tips and tricks, but we’ll have even more detailed guides coming soon, so don’t forget to check back often to read them.

Also, if you have some tips and tricks of your own, don’t hesitate to share them with the world in the comment section below.