Home Game Guides How to Play Fortnite Mod in Among Us 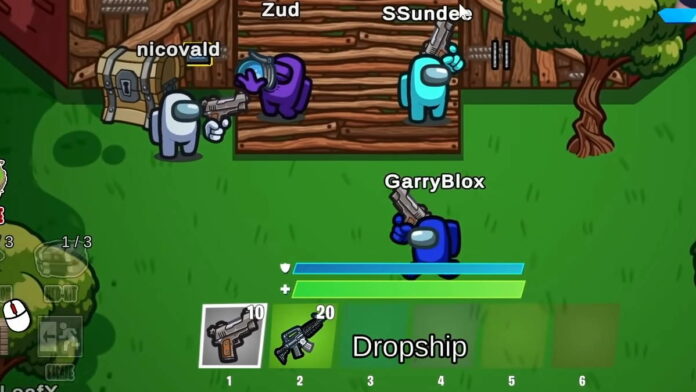 If you’re a fan of Among Us, there’s probably a good chance that you’ve seen the SSundee video that’s been going around showing off a spectacular new mod for the game. The video features a mod that recreates Fortnite in the world of Among Us, which includes material collecting, defense building, and of course lots of guns! You’re probably itching to try it yourself, so today we’ll see how to play the Fortnite Mod in Among Us.

You can watch the video in question below. This mod is very extensive and well done, as it brings over all of Fortnite’s elements into Among Us. Everyone starts at the drop-off point and runs around trying to gear up and survive against the other players. There’s assault rifles, pistols, and even lasers! You can also build defenses to wall off other players from certain paths or defend yourself.

The mod is developed by a mobile studio named DoubleJump, and it currently seems to still be in its testing phase. The reason we believe this is because the developers – which include popular gaming YouTubers like SSundee himself – haven’t made any public comments about it, and are instead just showing it off in videos like this one.

This basically means that, unfortunately, there is currently no way to play the Fortnite mod in Among Us. Unless, you’re a part of DoubleJump, you’ll have to wait until they release the mod for public use, if they ever do. This just seems like a fun mini project between the team, so we don’t know if they’re planning for a public release.

How to Play Fortnite Mod in Among Us