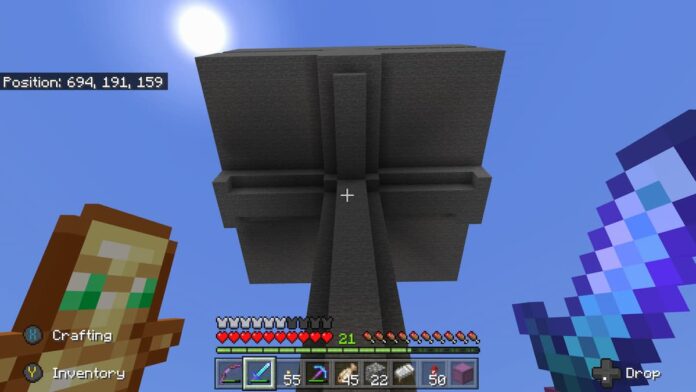 Almost every mob can be farmed in Minecraft. You can abuse game mechanisms and the mob’s AI to build efficient mob farms. Due to the plethora of monsters and animals available in Minecraft, many players end up creating many mob farms.

Early in the game, having a classic mob tower can provide tons of different resources and XP. Classic mob tower is among the oldest mob farm designs. This article will help you create a mob farm in Minecraft.

Related | How to Create a Creeper Farm in Minecraft Bedrock Edition

While classic mob tower is an easy-to-build farm, gathering required items might take some time. Here is the list of items required for making a mob farm:

After gathering items, you can start building the classic mob tower. Here are the steps for making this mob farm:

Step 1: Build the base of the farm over 100 blocks above.

To build an efficient mob farm, you must create the mob tower over 100 blocks above the surface. Make a 5×5 area for creating a collection system.

Step 2: Place four hoppers in a 2×2 area going into a large chest.

The next step is to create a collection system for gathering all mob drops. You can get tons of loot and XP from killing mobs who are barely alive after taking fall damage in this mob farm. Cover the hoppers with slab blocks.

You will now have to build a tall tower starting from the sides of the hoppers. This tower needs to be 30-40 blocks above hoppers. This will bring mobs’ health close to one heart in Minecraft.

The spawning platform is the most important area of this farm. Players will have to create big platforms in the corners with water streams in the middle of all four sides. This water stream will force mobs into the tower.

To confuse the mob AI and make them fall, you will have to place buttons on all blocks above the water stream. Refer to the image and notice the placement of blocks.

Step 5: Create a three-block wall all around the platform and build a roof

The farm is almost complete. You will now have to create a wall around the spawning platform. Once the wall is ready, you will have to cover the platform with a roof. This will prevent light from entering, which will cause hostile mobs to spawn.

Related | How to Set Up a Gold Farm in Minecraft

Hostile mobs spawned on the platform will wander around and fall into the flowing water. This will cause them to fall and take damage. You can stand at the bottom platform for farming mobs and gaining experience.

Minecraft YouTuber JCPlayz has a step-by-step guide to building this farm. You can watch the above video to learn more about the mob farm.

How to Make a Mob Farm in Minecraft Bedrock Edition