Home Game Guides How to Get the Sanguine Elixir in ARK: Survival Evolved 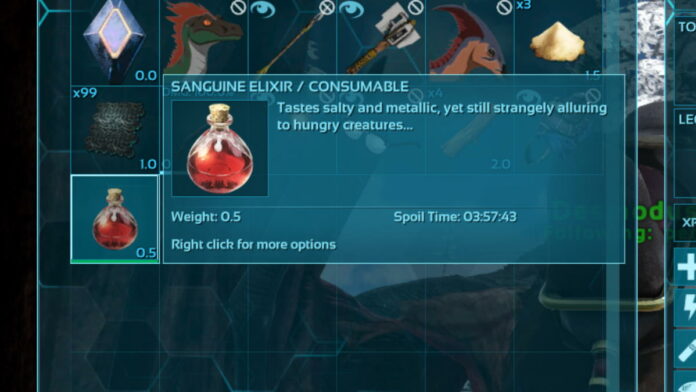 The new Fjordur DLC map for ARK: Survival Evolved is here, and with it comes a variety of new creatures and dinosaurs. One such creature is the giant vampire bat known as the “Desmodus”. These creatures of the night are able to siphon blood from other animals, producing Sanguine Elixirs as a byproduct. Today, we’ll show you how to get the Sanguine Elixir in ARK: Survival Evolved!

How to Get Sanguine Elixirs from Desmodus in ARK: Survival Evolved

To start working towards a Sanguine Elixir, you’ll need to tame a Desmodus. Desmodus are quite rare, and you can find them inside the massive cave networks scattered around the northwestern area. You can also find them in the dense forests near the northeastern section of Fjordur. If you’re in the caves, make sure to look up—often times they’ll be resting on the ceiling!

You cannot knock out a Desmodus to tame it, instead you must make it happy by giving it blood. Craft as many Blood Packs as you can, which can be obtained by using the Blood Extraction Syringe on yourself, sacrificing 25 health in the process.

Once you have a handful of Blood Packs, it’s time to find a Desmodus. They are aggressive creatures and will attack on sight, opting to swoop in to slash you with their claws. They will also attempt to grab you and fly around with you. While you’re in their grasp, you will slowly take damage, but if you have Blood Packs in your inventory, the Desmodus will drink them instead.

You want to purposefully let a Desmodus grab you so that it can feed off of your Blood Packs. Eventually, the Desmodus will be tamed, and you’ll be able to craft a Desmodus Saddle at the Refining Forge.

Once you have 200 Blood Packs, place them all in the Desmodus Saddle, and you’ll be able to craft a Sanguine Elixir. You can use the Sanguine Elixir on an unconscious creature to speed up their taming progress by 30%. This effect can only happen once in the creature’s lifetime.

That concludes our guide on how to get the Sanguine Elixir in ARK: Survival Evolved. It’s quite the process, but Sanguine Elixirs are invaluable for taming certain dinos and creatures. If you have any other questions or tips about Sanguine Elixirs, let us know in the comments below!

How to Get the Sanguine Elixir in ARK: Survival Evolved