Home Guides How to Get the Golden Shower Weapon in Terraria 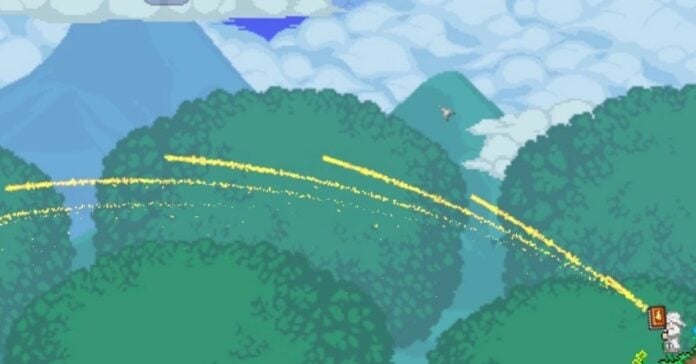 Golden Shower in Terraria is one of the most useful magic weapons in-game. Mages use it against anyone despite the level and the game’s current stage because of its useful effect. Ichor debuff that decreases the opponent’s defense is always welcomed against any boss or other formidable enemies. This guide will explain to you the way to obtain the Golden Shower magic book.

How to Get the Golden Shower

The Golden Shower is one of the most useful spells for a mage in Terraria. The first way to obtain it seems to be simple enough. You need to create a world with the seed <celebrationmk10>. There you can find a unique enemy in the Underground Jungle, the Jungle Mimic. Golden Shower spell book drops from this Mimic with 33% chance, but only in the Desktop Version. In cases you are playing on a different device or didn’t create a world with the needed seed, the only way to obtain the spellbook is to craft it.

As it was mentioned above, the Golden Shower puts the Ichor debuff on opponents. So, you may guess that it uses Ichor in its crafting. It means that the first step to craft the spellbook is to create a world with Crimson biome. Some of the stuff that you can get from Corruption is useful too, but Crimson is a preferable biome. The next thing you need is a special crafting station, the Bookcase. There are 41 of them available in the game. 35 versions are craftable and 6 versions can be looted in different places.

After you obtained the crafting station you need to get the ingredients. To create the Golden Shower spellbook, you will need the next things: x1 Spell Tome, x20 Ichor (x30 for 3DS version), x15 Soul of Night. You can buy the Spell Tome from the Wizard for 5 Golden Coins. Ichor drops from Tainted Ghouls and Ichor Stickers. These are habitant of the Underground Crimson and Crimson Underground Desert, and start to spawn in the Hardmode. Souls of Night drop from enemies that you kill in Underground Crimson/Corruption, even from not native ones. Use all of these ingredients and craft the Golden Shower spellbook.