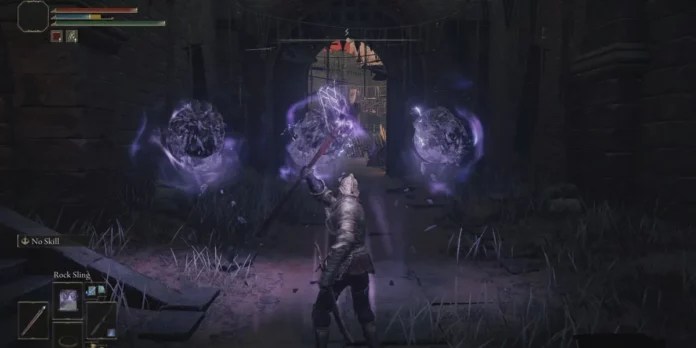 The Soulsborne games are known for their difficulty level, and Elden Ring is no exception. Each location has its own level of difficulty, some being less difficult than the rest. Some locations hold special items, sorceries, and armaments that make the game a whole lot easier. One of these sorceries is the Rock Sling.

Rock Sling is a Sorcery in Elden Ring. This sorcery spell launches projectile rocks from the ground that can damage nearby enemies. One of the few gravity spells in the game, Rock Sling can be devastating to certain enemies and bosses (like Rennala), due to dealing physical damage instead of magical damage.

Rock Sling can be found in a chest in an underground cellar just north of the Street of Sages Ruins. It can be tricky to get to however since it is surrounded by a group of Poison Mages, but either clearing them or running through will make it free to be picked up.

Our recommendation would be to use Rock Sling with the Meteorite Staff since it is one of the few spells that can be boosted with the Staff, being gravity magic.

How to Get Rock Sling in Elden Ring on Steam Deck