Home Guides How to Get Pumpkins in Terraria 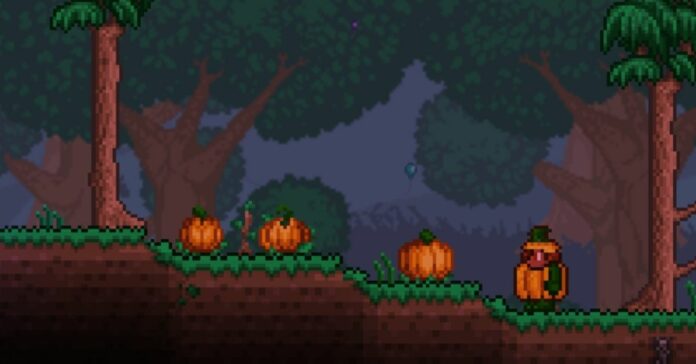 A pumpkin in Terraria is an item added in the Halloween update. It appears on the ground in the Forest and Sacred Grounds during the Pumpkin Moon. When destroyed, it drops 1-25 blocks of pumpkin. If you combine pumpkins, they will look like square blocks. To grow a pumpkin you need a place covered with grass two blocks high and two blocks wide. A Magic Pumpkin Seed may also be dropped.

In this guide, we tell you how and at what time to find or buy pumpkins, how and where to grow them, and teach some tips related to pumpkins.

Where to Find Pumpkins in Terraria

You have 2 options to get pumpkins. The First is to wait for October First and Halloween in real life. During these 2 events, pumpkins can spawn eventually all-around your world. And the second option you can buy pumpkin seeds for 2 silver coins and 10 bronze coins from a Dryad at any time.

RELATED: How to Get Ice Skates in Terraria

A Dryad is a Character who sells magic items and appears under the following conditions:

What You Can Do With Pumpkins

Once you buy seed, you must find ground with трава (in any biome) and place your pumpkin seed. Pumpkins can grow on Hallowed grass, but not on Crimson or Corrupt grass. And remember that pumpkins can only grow on the surface layer.

Pumpkins Tips And Tricks in Terraria

Creating a new world during Halloween can give the player an early-game advantage, as pumpkins appear naturally and the armor made from them can last until the Eye of Cthulhu.

A simple way to grow pumpkins during the Halloween season is to place strips of grass with dart traps shooting right over them to destroy anything naturally growing on the grass. This will allow the pumpkins to grow instead since the dart traps do not destroy the pumpkins.