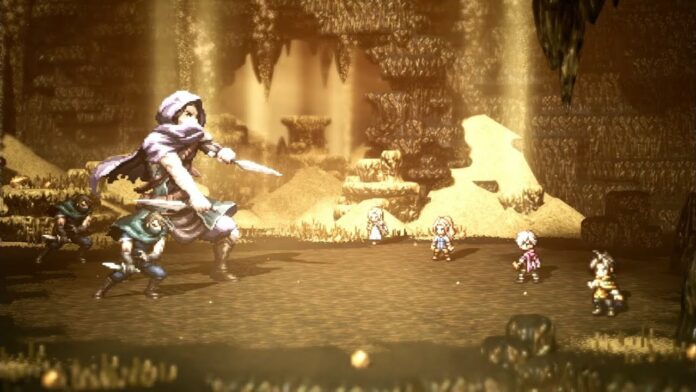 Octopath Traveler is a very beautiful JRPG with a huge open world. Players will be able to find 8 different characters to join the team. They all have unique abilities that will allow players to complete quests in a variety of ways. And, of course, battles can also win in different ways. And in this guide, we will tell you how to defeat Gareth.

How to Get Past Gareth Boss Battle

When players reach the end of the third chapter of Therion’s story, they encounter a difficult boss. This boss is Gareth, a bandit leader who serves Darius. This boss fights alongside two master thieves, but that’s not the biggest problem.

The main danger is that Gareth can do two actions in one turn. And after his master thieves lose, the boss will be able to do three actions. Therefore, it is difficult to understand what tactics to use to defeat him.

RELATED: How to Farm Money Guide in Octopath Traveler

Moreover, Gareth has several weaknesses, which are locked in a certain order after each break recovery. This is the reason why this boss is so problematic. We recommend that you use the Leghold Trap. So, the boss’s moves will end at the end of the round. And also, instead of attacking, Gareth will spend moves to get rid of the Leghold Trap.

For your characters to live longer, you can use Therion, which reduces the attack damage of enemies, and Tressa, which can increase the team’s defense. You can also use Poison as this fight will be very long.

How to Get Past Gareth Boss Battle in Octopath Traveler