Home Game Guides How to Get Metal Sonic 3.0 in Sonic Speed Simulator 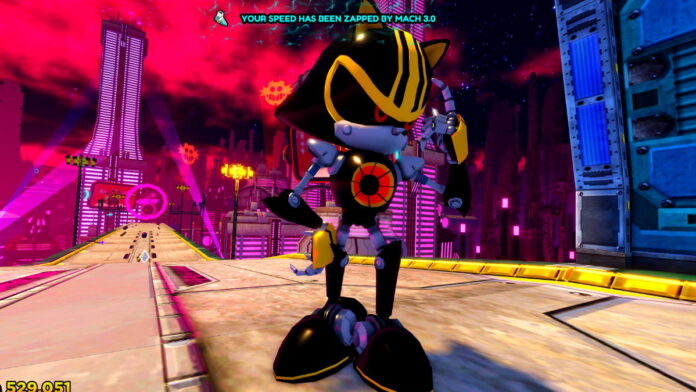 In Green Hill, head on over to the left end of the map. You should see a metal hallway that leads to Metal Madness, the same racetrack that you raced against the regular Metal Sonic on. Once you complete the first three event tasks, you will unlock Metal Sonic.

After that, you’ll receive a second set of event tasks called Mach Madness. There are three more challenges to complete, and they take even longer than the previous tasks. Don’t worry, we’ll help you complete them as quickly as possible!

The first challenge is to destroy 1,000 balloons as Metal Sonic. As was the case with the orbs from the previous task list, this task will probably take the longest because of how many times you’ll have to run the race.

There’s not really much to this challenge, just stick to the top path of the racetrack to get the most balloons. This is especially important towards the end of the race, where there are three sets of multiple balloons on the top section of the track.

The final challenge is to simply race as Metal Sonic for 30 minutes. You’ll complete this task naturally as you’re working on the other two, whether you’re trying to beat Metal Sonic Mach 3.0 or pop 1,000 balloons. You don’t have to worry about going out of your way to do this one.

Once you complete all three event tasks, Metal Sonic Mach 3.0 is yours! Enjoy the reward, as many players don’t him yet.

That concludes our guide on how to get Metal Sonic Mach 3.0 in Sonic Speed Simulator. If you have any other questions or tips, let us know in the comments below!

How to Get Metal Sonic 3.0 in Sonic Speed Simulator